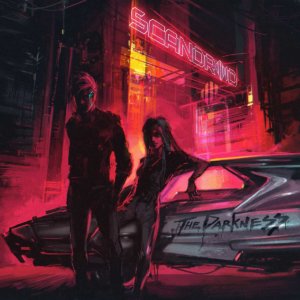 The dangers of an uncharted territory

Official press release: “The highly anticipated follow-up to Scandroid’s first two albums is here! The Darkness is Scandroid like you’ve never heard him before, as the artist unleashes his dark side across six brand new tracks. Never content to rest on what he’s already accomplished, Klayton, the mastermind behind the project, has driven his music into uncharted territory on The Darkness and given every song its own distinctive identity. From the old school heavy metal riffs of ‘Phoenix’ to the ominous Cybersynth tone of ‘Red Planet’ and ‘Out Of The Darkness’, each entry will pull you deeper into Scandroid’s darkly cybernetic world.

In addition to the six original tracks, Scandroid has packed The Darkness with electrifying remixes from some of the most talented and innovative artists in and around Synthwave today. Even better, this new release is just the start of Scandroid’s latest creative opus, The Darkness and The Light. Fans will be able to immerse themselves in the second half, The Light, in 2019, with a complete full-length release to follow. The journey through The Darkness and The Light begins right here.”

My verdict of the so-called ‘album’

Unfortunately, this time I’m not that convinced of the third work ‘The Darkness’. This is also more of an EP or recently called mini-album if a few more remixes are included. My highlights are ‘The End Of Time’ and ‘Onyx’. The rest is instrumental or the remixed version, but much weaker than the original songs. I hope that ‘The Light’ in 2019 will have more to offer.

Get ‘Scandroid – The Darkness’ here