Aesthetic Perfection – Into The Black 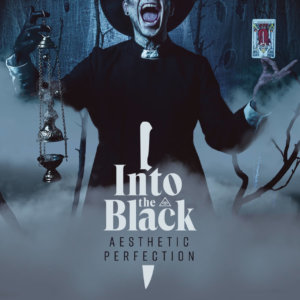 After their last release ”Til Death‘ in 2014, Aesthetic Perfection ring in the year 2019 with their new release ‘Into The Black’ and take Industrial Pop to the next level.

Pop melodies from the 90’s, mixed with 80’s style guitar chords and industrial elements, along with lyrics about death, gods and the afterlife – hell, this sounds like a mess, doesn’t it?

This album proves that Aesthetic Perfection are willing to step out of their comfort zone and try out something new, without having to give up on their roots. ‘Into The Black’ is obviously the result of the previous EPs ‘Ebb and Flow’ or the N’Sync cover ‘Bye Bye Bye’.

Even though I am sure that Daniel Graves gave the lyrics a lot of thought when producing this album, I must say that the sound compositions are much more interesting and give this album its individual style, probably because some of the songs were produced in cooperation with Jinxx from the Blackveil Brides, Krischan Wesenberg from Rotersand and Richard Z. Kruspe from Rammstein.

If someone would ask me what the hell Industrial Pop is (about), I would say simply say: This is it!

The first song of this album gives a perfect introduction of what we have to expect for the next 45 minutes:  ‘Gods and Gold’ starts off with a heavy, slow beat and guitar chords to bang your head to. These in-your-face beats are accompanied by Daniel Graves’ typical harsh and rough voice, who sometimes hammers the words to the listener like in a rap solo while switching to a softer, more melodic pace in the chorus. The constant change in rhythm gives this first song its individual touch and perfectly represents the contrast between anger and hopelessness forwarded by the lyrics.

There is no justice, there is just rage and greed.
Lyrics from ‘Gods and Gold’ by Aesthetic Perfection

‘Wickedness’ takes on a more electronic pace and sounds at some point like a sequel to ‘LAX’. When listening to it for the first time, I could just imagine Daniel Graves sitting in front of his computer, trying out different arcade sounds, bouncing his head to it. These Nintendo-like sounds build up to the chorus, which is completely different from what I had expected: it literally sounds like David Guetta! This is definitely a bold move, but after all, this is what Industrial Pop is about. The song really is kind of catchy and I can’t help but bop my head to the melody.

Taking up the playful theme from the previous song, ‘No Boys Allowed‘ invites us on the dance floor with its provocative electronic elements and its pounding EBM rhythm.

What’s it worth equality? We’ve got just one rule.
Lyrics from ‘No Boys Allowed’ by Aesthetic Perfection

The second part of the chorus, however, offers a surprising twist. The chime bells, which remind me of a typical horror movie theme, seem to be taunting and scary at the same time, reminding everyone that this life is not for sissies.

To ‘wear the mad kick’ of the previous songs off, ‘Supernatural’ introduces the second part of the album, which continues on a slower pace. The distorted sounds in the chorus perfectly fit the lyrics about our everlasting yet futile strive for perfection.

We’re just human after all, we’re not supernatural.
Lyrics from ‘Supernatural’ by Aesthetic Perfection

The beginning of the song directly reminded me of ‘Never Enough’ from the record ‘Blood Spills Not Far from The Wound’ and it’s almost as if an older version of Daniel Graves is talking to his ‘foolish, younger self’ from ‘Never Enough’.

‘Echoes’ pursues this contemplative theme while maintaining the same slow momentum, accompanied by Jinxx’s guitar chords, which accurately underline the lyrics. While the chorus instantly stays in your head and make you want to sing along, the lyrics remind us that it might sometimes seem tempting to only listen to what we want to hear, but that it’s not necessarily easier than to face reality.

I’m stuck inside an echo/I’d rather live a lie until the end.
Lyrics from ‘Echoes’ by Aesthetic Perfection

Just like the previous song, ‘We Wake Up’ also seems to deal with the feeling of being stuck, only that now we’re captured in a bad dream and we cannot seem to face the night’s horrors. The female background singing gives this song its typical pop style we heard so much of in the previous songs. Still, the song keeps its unique Aesthetic Perfection style with Daniel Graves’ distorted voice and his rough screams responding to it. Again, if you want it or not, just like being stuck in a bad dream, this song will be stuck in your head.

With ‘If I Die’ the guitars return to give this song a touch of the 2000’s. When I first heard the chorus, I felt transported back to my youth with all its “happy pop-rock bands” and I immediately felt the urge to sing and dance along to the lines ‘If I die today, will you remember me?’ The guitar solo at the end, which reminded me a lot of The Darkness’ ‘Love Is Only A Feeling’, virtuously rounds up the song on the brink of sounding completely out of place.

The song ‘Saint Peter’ is a limp back to Aesthetic Perfection’s electronic roots and does not hold any surprises in terms of experimental variations compared to the other songs on the album. The mid-tempo beats are mixed with synthesizer sounds to accompany the fatalistic lyrics about faith and belief.

No faith, no light, no end in sight.
Lyrics from ‘Saint Peter’ by Aesthetic Perfection

Just like the previous one, ‘YOLO’ is a purely electronic song which alters Daniel Graves’ rough screams and melodic singing. The repeated announcement ‘heading for self-destruction’ by the news anchor voice in the background reminds you of an alert signal repeated over and over again, as if it were reminding you that it will all be over one day. This seems to be exactly what Daniel Graves suggests when he passionately screams out that ‘one life is all we need’ because either way, we’re all going to die one day, so why not just make the best out of it?

Why do we waste these moments, so precious and so brief.
Lyrics from ‘YOLO’ by Aesthetic Perfection

‘Mourning doves’ is the tenth and last song of this album and is a perfect sequel to ‘YOLO’. It sounds like the aftermath of a crazy party, as if you were still recovering from last night’s madness. But just when you think this is just a slow, melodic song rounding up the album, here come the guitars, directly teleported from the 80’s, giving this song an almost dramatic touch. A worthy ending to a turbulent musical rollercoaster ride!

With their new album ‘Into The Black’, Aesthetic Perfection have convinced us that it’s important to break with “the good old habits” to create something new. Although Daniel Graves doesn’t consider himself belonging to one specific genre, he confirmed himself that he fancied a lot of different genres and this is exactly what we can hear on the new release.

Still, I remember peoples’ bewildered looks when Aesthetic Perfection performed ‘Bye Bye Bye’ on stage, that’s why I sincerely hope the audience will be ready for this album and cherish it as it is : a masterpiece of Industrial Pop.

Personally, I really got to love the album ‘Into The Black’ and can’t stop singing or bouncing along! This might be the next step in the history of Industrial Pop and hopefully, another step into a bright future for Aesthetic Perfection. 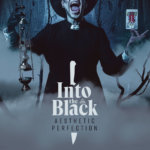