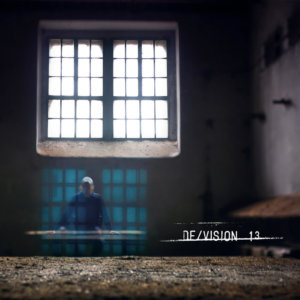 A potential candidate for the album of the year 2016

It will be hard for me to write this review without using a superlative word in almost every sentence while talking about the album. Here is a spoiler: “If you like Synth Pop music then this is a must have album“.

Average are most of the songs in the mid-tempo. In addition, they sound very gloomy and serious. But for their latest production, ‘De/Vision’ has put a lot of energy, lifeblood and unbounded creativity on the album ’13’.

‘Who Am I’ is a gorgeous opener and a truly club hit. From the first beats, the song feels right in my chest. The track is full-packed with unique and extraordinary electronic sounds. The lyrics became quickly an ear-worm to me. What an awesome start for the new album!

The second track continues with the 5-star rating. ‘Essence’ is a typical classic ‘De/Vision’ Synth Pop song in a superb modern style. It sounds very diverse through the dynamic in the loudness and speed variation. ‘Starchild’ comes a bit quieter around the corner. But the song exudes a lot of emotion in a really beautiful way.

’13’ seems to be De/Vision’s lucky number

An album nearly full of hits. It almost sounds like a “best of” album. We also give the song ‘Where’s The Light?’ full 5 stars. Here you get a dreamy track with heavenly sounding samples.

Followed by another full rated score song called ‘Synchronize’. I guess this will become soon a hot rotation club hit. ‘Synchronize’ is a brilliant catchy song that correspond with my synapses and connects easily with my brain.

We skip the next two wonderful tracks to go forward to another highlight of the album ’13’. ‘Their World’ has the potential for a Single to us. The sound comes with a fruity and euphoric vibe, while the lyrics have a much darker twist.

The rest of the tracks except the last one are all scored with an incredible 4 star rating. As you can see the album ’13” is far away from being a mediocre long-player. The songs are all very varied, they sound consistent and harmonic and the lyrics are all together at the highest level.

The last five tracks are only available on the special edition of ’13’. You don’t have to worry, these aren’t b-sides! Qualitatively they are valuable as the album songs. The song ‘Transit’ is an instrumental track that is the reason for the only 2 star rating on the whole album.

The album drew me with the first sounds into the spell. And yes, I’m almost about to say: “That’s the best De/Vision album ever!”. All songs are super catchy and the samples and effects sounds like from another world. I just can say: “Buy the album and spread the word. De/Vision’s new album ’13’ is definitely a potential candidate for the Electrozombies album of the year 2016.”.

De/Vision - 13 (Special Edition)
Who Am I
Essence
Starchild
Where's The Light?
Synchronize
Prisoner
Read Your Mnd
Their World
Gasoline
The Firing Line
No One's Land
You Don't Mean Anything
I'm Your Son
Black And White
Transit
Recommend
Who Am I
Synchronize
Their World
Instrumental
Transit
4.2
Must-Have