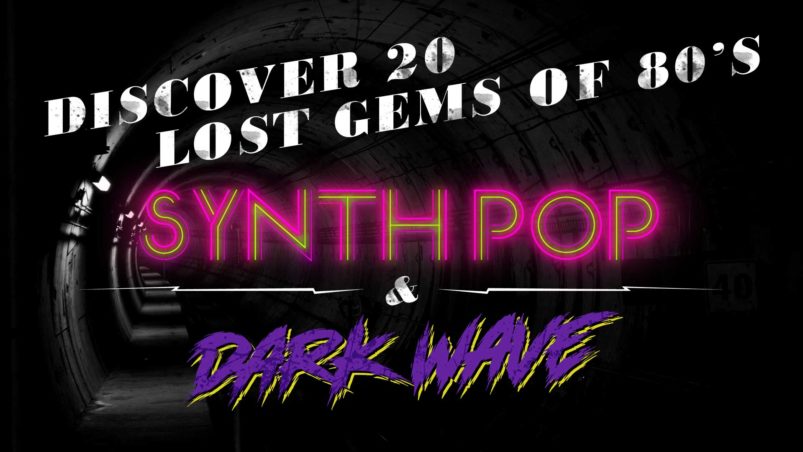 Online you can find a lot of lists that promise you 80s Synth Pop and Dark Wave hits. But lets face it, somehow it’s always the same tracks, don’t you think so? In the last few years I came across music videos from the 80s that I had completely forgotten or totally missed.

Admittedly, the list includes not only scene songs, but also Electropop hits that have been played on mainstream radio. But the few songs in this list definitely have a right to exist. They have aged excellently and are far from being as cheesy as I remember them.

But enough of the small-talk, go explore and enjoy these fantastic songs and of course their music video creations.

Discogs information about the band: “Koo De Tah was a New Zealand/Australian pop music band of the 1980s. The core band members were Tina Cross (a native of New Zealand) and Leon Berger (Australian), who met in Sydney. […] The band’s self-titled debut album was released in 1986. “Too Young For Promises” was featured in the 1984 film “Streets Of Fire”, starring Michael Paré and Diane Lane. The band was active from 1984 to 1987.”.

Official music video ‘Unfamilar Room’ performed by ‘Testcard F’is the b-side of the Single ‘Bandwagon Tango’ (1983). This is a typical New Wave / Synth Pop track of the early 80s with a nice Post Punk touch.

Official music video ‘Love System’ by German Synth-Pop band ‘The Twins’ taken from the album ‘A Wild Romance’ (1983). Sure, this track is a bit cheesy, but I really like this naïve 80s summer / everything is good feeling.

Official music video ‘Bad Boy’ by 80s girls’ idol ‘Den Harrow’ taken from the debut album ‘Overpower’ (1985). This is rather a typical Italo-Disco track from those days.

Official music video ‘Blue Dolphin Blue’ performed by ‘Séance’ taken from the same-titled album ‘Blue Dolphin Blue’ (1988). If you like this song, we have good news for you. After over 30 years the band has released a new album called ‘Where We Came From’ (2020). The guys also produced a new music video with the same name. Watch it right here.

Official music video ‘Step By Step’ by ‘OFF’ taken from the album ‘Organisation For Fun’ (1988). If the singer looks familiar to you, then don’t be surprised. It is nobody less than the Techno icon ‘Sven Väth’.

Offical music video ‘A Day’ by Dark Wave band ‘Clan Of Xymox’ taken from the self-titled album ‘Clan Of Xymox’ (1985). Everybody knows the Dark Wave veteran from the Netherlands, of course, but this early work was actually not known to me until recently.

8. The Human League – Open Your Heart

Official music video ‘Open Your Heart’ performed by ‘The Human League’ taken from the classic album ‘Dare’ (1981). When it comes to 80 years of synth pop classics, ‘The Human League’ is always involved. But mostly with the song ‘Don’t You Want Me‘ and if it’s a bit fancy then with ‘Fascination’. But this band offers so many fantastic songs and I recommend to listen to the discography for example on Spotify. You will discover some musical pearls here. Promise!

9. Peter Schilling – The Different Story (World Of Lust And Crime)

10. Nick Kamen – Each Time You Break My Heart

Official music video ‘Each Time You Break My Heart’ by ‘Nick Kamen’ taken from the self-titled album ‘Nick Kamen’ (1987). I had completely erased the song from my memory. A pity, even if the song is rather mainstream and a bit cheesy. But the melody captured me at first hearing. This is also one of those songs where you say: “The song can’t influence me at all or catch my attention”, and then you have a earworm for weeks.

Official music video ‘Angel 07’ by ‘Hubert Kah’ taken from the album ‘Tensongs’ (1986). The original was a German NDW hit with the title ‘Engel 07’. Due to the great success, this and other songs were re-recorded in English for an international audience.

Official music video ‘Two Of Hearts’ performed by ‘Stacey Q’ taken from the album ‘Better Than Heaven’ (1986). Honestly, I completely missed this song in the 80’s. But I don’t think it’s bad.

Official music video ‘Telegraph’ by British Synth Pop band ‘OMD’ taken from the album ‘Dazzle Ships’ (1983). Also this excellent band is doomed to appear in ‘Best of’ lists only with the songs ‘Maid Of Orleans’ or ‘Electricity‘. Without any question these are great songs, but the band offers so much more. Go on a journey of discovery now!

Official music video ‘Temptation’ performed by ‘Heaven 17’ taken from the album ‘The Luxury Gap’ (1983). Okay, admittedly, this song is of course a familiar number to most people. At least it should be. In this case I’m especially fascinated by the music video, which is as typical 80s as it can be.

Official music video ‘Army Now’ by ‘Futurisk’ taken from the album ‘The Sound Of Futurism 1980 / Army Now’ (1980). This song is also more of a random discovery. At the absolute height of the Post-Punk era this powerful song was created.

Official music video ‘Blind Vision’ performed by ‘Blancmange’ taken from the album ‘Mange Tout (1983). ‘Blancmange’ also has the typical classics in stock. For example ‘Living On The Ceiling‘ or the magnificent ‘ABBA’ cover ‘The Day Before You Came’. If you like the song presented here, a voyage of discovery is also a clear recommendation.

Official music video ‘Never Come Back’ by ‘Kas Product’ taken from the album ‘Try Out’ (1980). Neither from the band nor the song, I have heard anything before making this list. This video was suggested to me in my last research steps. Thanks YouTube! Who knows this song or the band? Please let me know in the comments below.

Official music video ‘You, You’ by German band ‘Malaria’ taken from the album ‘…Revisited’ (1983). It all started with that video. It was the first discovery for this new list and finish with this New Wave classic here.

I thank you for participating in this journey into the past. Furthermore, I hope that you, like me (as long as you are old enough), have relived some wonderful memories of the past.

Do you want to continue the discovery? Then checkout the following articles with a similar topic.

If you were inspired by this article and remembered some rare, lost and/or forgotten songs, let us know and use comment section below or get in touch with us via E-Mail!