Home
Magazine
Article
12 epic Synth Pop songs of recent years that you should not have missed!

12 epic Synth Pop songs of recent years that you should not have missed!

Sometimes, only some­times, a song appears  that imme­di­ately blasts your brain away, and you fall deeply in love with it. In this art­icle I’m going to present you 12 epic Synth Pop songs you shouldn’t have missed if you are a true Synthpop music fan. Please keep in mind that this is an unordered list without any rating.

And here we start with a song from the band Mimicry. "The Destination" is a lovely and naïve Synthpop song with a light footed melody on a good mid-tempo beat. The song was released in early 2012. Unfortunately they nev­er released a full-length album. I know they had some EPs, but their offi­cial web­site and social chan­nels are all down.

Watch the official music video The Destination by Mimicry

2. Ben Ivory – The Righteous Ones

"The Righteous Ones" is Ben Ivory's second single from the debut album Neon Cathedral, and offi­cial entry song for the German nation­al finals for ESC 2013! Officially, this is a power­ful, dance­able queer song. Personally, I find this song has many more lay­ers. From the lyr­ic­al point of view, it is more of a song about the uncon­di­tion­al accept­ance of equality.

What I really love about this song is its light and catchy way, and once the chor­us starts a dynam­ic, ener­get­ic beat drives the song to its peak. I rated the album Neon Cathedral with a 3.9 stars rat­ing, because there are a plenty of oth­er great songs on it. You can read the full track by track review here. Hopefully the sequel will be worthwhile.

Watch the official music video The Righteous Ones by Ben Ivory 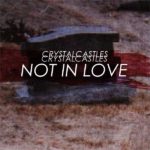 "Not In Love" is a cov­er song ori­gin­ally pro­duced by Platinum Blonde. Crystal Castles have adop­ted this song, com­pletely mod­ern­ized, and with Robert Smith's voice they pro­duced a real club hit. The mel­an­chol­ic lyr­ics stands against the dance­able beat, like the meta­phor­ic­al "dan­cing with tears in my eyes".

Sadly they didn't release an offic­al music video for the song. At least they pub­lished a video with a still image on their offi­cial YouTube chan­nel. Furthermore YouTube user Nanalew made a really good fan music video which you can check out here: Nanalew' fan video for Not In Love.

The band Lowe has cre­ate­da superb Synthpop hit with "A 1000 Miles". This track has the right tempo, a catchy melody, and the chor­us is an easy sing-along. The song also provides some Electrorock ele­ments with a cool elec­tric gui­tar, without emphas­iz­ing it too much. It's still more Pop than Rock.

Wikipedia on the band: "Lowe is a Swedish syn­thpop band formed in 2002 by Leo Josefsson (vocals/guitar), Rickard Gunnarsson (bass) and Mehdi Bagherzadeh (key­boards). The music can be described as emo­tion­al pop, con­trived with elec­tron­ic ele­ments. 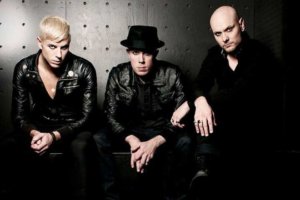 Their first three singles ”The Vanishing”, ”Ahead Of Our Time” and "Hear Me Out" quickly earned them the repu­ta­tion as ”the new hope for Swedish pop”. The band has been com­pared to such artists as Depeche Mode, New Order, Keane and A‑ha.".

Watch the official music video A 1000 Miles by Lowe

A debut with a deserved 4 star rat­ing – this is Pre/Verse's album Obstacles. Originating from this album, "Trace Of Water" is only one of many ear­worms that make you want to dance imme­di­ately. However, the band mem­bers are no green­horns. Some of them have gained exper­i­ence with bands like Blutengel, Harmjoy, Tyske Ludder and Rotersand. The res­ult is that spec­tac­u­lar debut album.

Watch the official music video Trace Of Water by Pre/Verse

Aesthetic Perfection might not fit 100% into the Synthpop genre, actu­ally it's some­thing between Futurepop and Industrial. In my opin­ion Daniel Graves has pro­duced a more dance­able, and melod­ic song than ever before with "Antibody". Allthough the song "Inhuman" from the pre­vi­ous album is quite com­par­able, it doesn´t reach this new, catchy attitude.

"Antibody" is the first single from the fourth album 'Til Death which became Electrozombies´ Album Of The Year in 2014. Like "Antibody" also all the oth­er singles (Big Bad Wolf, The Dark Half, and The New Black) achieved a full 5 star rat­ing. Definitely a must-have record!

From 'Aesthetic Perfection' to a 'Perfect Tragedy': Age Zero is Jan Weisbrod´s solo pro­ject who was the founder and sing­er of the Electrorock band Heavy-Current. This is prob­ably the least access­ible song on the list. But once you´ve got­ten into it, you will find an incred­ible depth in the song that is rarely to be found. I also reviewed track by track the self titled 2013 album. With an over­all rat­ing of 4.25 stars it nar­rowly missed the first place of the Album Of The Year award. See the full track by track review here.

Tying Tiffany is an elec­tron­ic music sing­er and song­writer, born in 1978 in Italy. She already released two full length albums before but some­how I missed these pre­vi­ous releases. "Lost Way" is taken from the 2010 album Peoples Temple; it does have some heavy gui­tars indeed, but I wouldn´t call it Electrorock. The tunes are har­mo­ni­ous and the sound is really dynamical.

In my opin­ion "Peoples Temple" is Tying Tiffany´s best album so far. The suc­cessors Dark Days, White Nights (2012) and Drop (2014) didn't catch me that intense as Peoples Temple did. I can only recom­mend this mas­ter piece. Additionaly the album was released in a remix edi­tion with remix ver­sions from Spiral69, XP8, You Love Her Cause She's Dead, and some more.

9. Solar Fake – More Than This

Solar Fake has by now become well-known and pop­u­lar in the black elec­tron­ic scene. When I first watched the music video of "More Than This", the band was far from being pop­u­lar. So, I really felt I found some­thing new and spe­cial. The song linked beau­ti­fully dark lyr­ics with a dance­able uptempo beat. Back then, just like today, this song really impressed me. And what´s best: the guys from Solar Fake grow bet­ter and better.

"More Than This" is taken from their second album called Frontiers. Besides oth­er great tracks there is also a gor­geous cov­er ver­sion of Talk Talk's "Such A Shame" on it. In the end I found a new favour­ite band through this won­der­ful song "More than this".

Watch the official music video More Than This by Solar Fake

When the band Cinema Bizarre took a cre­at­ive break, Strify star­ted a solo career as Jack Strify. And to be hon­est, I needed to do a research for this, because I nev­er listened to Cinema Bizarre. Maybe I'll do someday, when I really have a lot of time.

Back to the main top­ic. "Halo (We're The Only One)" is a won­der­ful and a little cheesy love song. The whole arrange­ment fits homo­gen­eously to the lyr­ics. Soft melod­ies, an angel­ic voice but it also offers enough pop factor for dancing.

BONUS CONTENT! The following two bands are no typical Synth Pop bands as one might expect. Still, these songs are close enough to relate to the others.

Dúné is no ordin­ary Synth Pop band. On the con­trary, they cre­ate a mix­ture of Electrorock and Indietronic. During the past years, and the shrink­ing of the band of once 7 to only 3 mem­bers, the sound has unfor­tu­nately become less and less elec­tron­ic, which I per­son­ally pity very much.

However, the song "80 Years" forms an excep­tion because it is very elec­tron­ic, intu­it­ive and also a little naïve – just the way it should be for a young band, and that's what makes the song so ami­able. The whole album "We Are In There You Are Out Here" as well as the fol­low­ing album "Enter Metropolis" are def­in­itely worth listen­ing to!

Last but not least, and also the new­est one in this list is a band from Sweden called Human Lynx. They simply define their music as elec­tron­ic indie pop. For me, their music style is quite close to Synth Pop. The sound is very clear and crisp, not too min­im­al­ist­ic and not too over­filled.  The voice is clearly in the fore­ground which focusses the lyr­ics. Unfortunately the band hasn´t released a full length album yet.

Please share your thoughts in the com­ments. If you think, I for­got some­thing or you just want to sug­gest related oth­er bands, feel invited to use the com­ment sec­tion below! Watch out for more lists com­ing soon.