Home
Music
Review
And One – Magnet (Trilogie I)

And One – Magnet (Trilogie I) 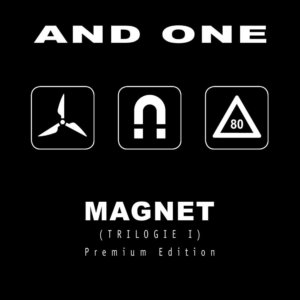 I love 'And One' since the early 90s. With the album 'Virgin Superstar', which was more than major label infec­ted, they has screwed it quite a long time with me. With 'Military Fashion Show' and the EP 'Zerstörer' they have some well done on the ground again.

The first time I heard that 'And One' is going to release an album with such a huge con­tent, I'm expect­ing the worst of it. My second thought was some­thing like: "Well, when they release an album with 30 (!) songs, then there will be at least enough good songs for a reg­u­lar album size.

God damn, I'm so happy that I was totally wrong with my con­cerns. With the album 'Magnet (Trilogie I)', 'And One' has found it's old strengths and that's a good thing!

This is the most clas­sic part of the tri­logy. It sounds some­where between 'Spot' and 'I.S.T.', but per­fec­ted. This is the album where I've been wait­ing for all these years.

The greatest tracks on 'Magnet' are: 'Zeit Ohne Zeit' and 'Love Is Always On Your Side'. Furthermore I recom­mend to listen to the songs 'Fake Of Pleasure' and 'Unter Meiner Uniform'.

"Dancefloor I'm com­ing!":, shouts the 'Propeller' part. Classic EBM beats mixed with Synth Pop tunes. The open­er 'Black Celebration' is a bomb of a track, fol­lowed by the even harder EBM songs 'Männermusik' and 'Synchronizing Bodies'.

Beside these super­i­or songs I strongly recom­mend the ger­man songs 'An Alle Krieger!' and 'U‑Boot Krieg In Ost-Berlin'. Especially the last one is lyr­ic­ally so won­der­ful absurd without becom­ing ridiculous.

The expec­ted time travel to the 80s doesn't work that per­fect as I expec­ted for the 'Achtung 80' part, but that's abso­lutely fine for me. The open­er 'Let's Get Higher' is more a mid 90s pop song with a slight Euro Disco influ­ence. I fell in love with the songs 'My Angel' and 'She's Triple 6'.

'The Fighter' is a spe­cial track on this CD. It could be eas­ily fit on the 'Propeller' part, because you can't ignore the rela­tion­ship to the EBM genre. But 'And One' mixed it with some clas­sic 80s synths sounds that sounds really cool.

Big con­grats and respect to 'And One'. You are still on it, and the best part is that you have me dis­ab­used. Because death pre­dicted live longer. All grief is for­got­ton and I will leave the 'Virgin' years behind. This is a true mag­num opus!

By the way, this album also made it into our art­icle ‘The best Synth Pop and genre-related albums 2014‘. Read now.

And One – Magnet (Trilogie I)
Love Needs A Saving Hand
Zeit ohne Zeit
Love Is Always On Your Side
Unter mein­er Uniform
The Other Side
Love Me
Keiner fühlt's wie wir
Everybody Lies At Night
Fake Of Pleasure
Dead Love
Black Generation
Männermusik
Synchronizing Bodies
An alle Krieger!
Nyctophiliac
Zwei Tote
Before I Go
U‑Boot-Krieg in Ost-Berlin
Up & Down
New Wave Mother
Let's Get Higher
My Angel
She's Triple 6
Somebody's Song
Bad Girl
The Fighter
Girls On Girls
Why Don't You Let Me Go
Love Trashing Girls
Your Pet Is A Ticking Bomb!
Recommend
Zeit ohne Zeit
Love Is Always On Your Side
Black Generation
U‑Boot-Krieg in Ost-Berlin
Weak
New Wave Mother
Somebody's Song
4.1
Epic