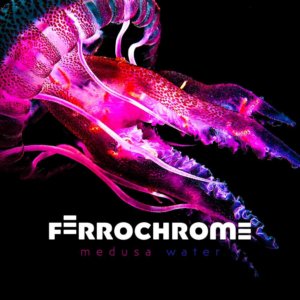 Both musicians are real professionals and have been providing the black scene with catchy, electronic music for decades. In this review we will check if the cooperation on ‘Medusa Water’ was successful and how the result sounds.

‘The City’ begins super electronically. Here the boys get the most out of the synthesizers. I’m directly captured by this incredibly powerful Synthpop track, reminiscent of ‘Duran Duran‘ in the chorus. It’s very catchy and sounds ultra modern. The song is an excellent choice to start the album.

Powerful and full of energy, ‘One Million Cries’ begins. The danceable up-tempo track has everything a single needs – especially radio-friendly. Just the lyric line ‘One million cries to smash the skies’ sounds a little bit chessy. However, I love how ‘Ferrochrome’ has managed to pack a very serious text into a summer hit. A gorgious performance!

From an ordinary world

The third number ‘Where Are You?’ could be a song from the ‘Wedding Album’ of ‘Duran Duran‘. The track is definitely on its own! I would like to emphasize that the new comparison with ‘Duran Duran’ is to be understood as a compliment to ‘Ferrochrome’. Sonically the song is a kind of melancholic pussyfoot, with a proper portion of deep emotions. The end is extremely unusual as it abruptly aborts with a glitch effect.

‘Under The Tongue’ has an impressive beat: Slow but pulsating intense. Most samples are more reminiscent of Minimal Electro, but ‘Ferrochrome’ shows how to transform them creatively into a highly emotional Synth Pop track.

Acoustically temperamental and much more fast-paced is the fifth work on ‘Medusa Water’. Analogue to the title ‘Fighters In A Cage’, this song also phonetically fought with all electronic means available. Practically a battlefield of samples and synthetic sounds. The thing is definitely ready to fill the dance floors. And from my side, a tip for listening.

I have a single point of criticism. The title song ‘Medusa Water’ has irritated me tonally. As much as I like variety on an album, this also has its limits. What awaits you at the title track? Imagine yourself on plucking acoustic guitars, a kind of ‘Aloha-Hawaii’ swing sound and the ambience of a ‘beautiful ideal world’ soap opera. Either pure sarcasm or just ‘WTF?’. Tell me your opinion in the comments section.

From the depths of a cave, it echoes artificial drops. This is the prelude to the play ‘The Fuse’. However, a Spanish-sounding acoustic guitar brings warmth to the scenery. Subsequently the song slowly fills itself with further extraterrestrial sounds. This song moves comfortably through moody lyrical worlds, heavenly strings and a mystical aura.

With Kraftwerk-esque minimalistic tones and melodies takes ‘Shoot The Freak’ us onto a an hypnotizing ride. The soft vocals are almost therapeutic and leave a pleasant, relaxed feeling. ‘Ferrochrome’ proves once again on ‘Medusa Water’ how varied and creative an album can sound.

‘Welcome The Night’ is another original and imaginative variation of the sound of the two electric guys. The song is a mid-tempo Synth Pop track with a tonally gloomy atmosphere. The sound here is industrially cold, but also has enough impulse to insist on the dance floor.

… or at least the jellyfish!”. Fascinating on the debut of ‘Ferrochrome’ is the musical variety. This is creatively implemented without distorting the still very young but still own style. In this case we also can argue that the two experienced Electro Heads know exactly what they are doing.

The album ‘Medusa Water’ is a breathtaking electronic journey, without drowning in the depths of complexity. The many catchy melodies echo and have enough substance to last for years. Despite one tonal blame (In terms of the title track), we can only highly recommend ‘Medusa Water’.

On our own behalf

‘Ferrochrome’ also appeared on the Electrozombies compilation ‘Prism (A Tribute To Pet Shop Boys)‘ performing an awesome version of ‘Psychological’. This tribute is still available on all major digital stores and streaming services.

Find out more details about this release here: Prism (A Tribute To Pet Shop Boys). 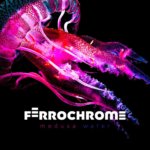