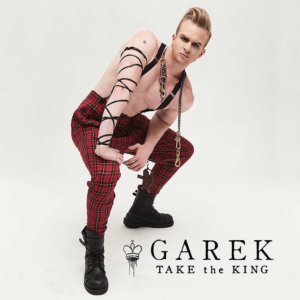 A radiant light from the US

America's scene of Industrial, Synth Pop and Darkwave is grow­ing very fast the last years. This week we received a promo of the debut album 'Take The King' by 'Garek'. For us it seems that a brand new artist enter the stage. For that reas­on, we were all more amazed as we saw that 'Garek' has already done his music video debut with 'Save The Queen' 4 years ago.

On his YouTube chan­nel we also found more awe­some music videos, and fur­ther we dis­cov­er his releases on his Bandcamp page from the past years. Obviously 'Garek' isn't really a new­comer in the scene, but he didn't make waves out­side the US. We hope this will change dra­mat­ic­ally after this review. Spoiler: "The album is awe­some!".

The open­er 'Cavity' starts imme­di­ately with a vibrat­ing Industrial influ­ence. The pulsat­ing bass beats that blast deep and loud, gave us the feel­ing that our speak­ers will explode soon. The tempo of the track is in the low beat range. The chor­us reminds strongly of Nu Metal influ­ences such as 'P.O.D.', 'Disturbed' or also 'Linkin Park'. But it's still a pure elec­tron­ic track which gives it an unique sound. Personally I would call the genre some­thing between Industrial Pop and Nu Industrial.

The second title 'Save The Queen' is revolu­tion­ary, espe­cially with the back­ground know­ledge that this song is already 4 years old. With the first listen­ing we would have said imme­di­ately, this is a brand-new 2017 song, but it isn't. 'Save The Queen' is def­in­itely one of the catchy tunes we would like to recom­mend to listen to.

'My Animal' is music­ally even more towards the dance floor. Here the tempo is increas­ing and the pop factor is clearly drawn. This is very good for the album, as it shows the cre­at­ive diversity of Garek's com­pos­i­tions. The num­ber 'My Animal' has much vocal sim­il­ar­ity to Lauri (The Rasmus) which we really like. Here it sounds abso­lutely awesome!

A fur­ther music­al vari­ety gives us the fol­low­ing song 'Ledge'. This one goes more into the Electrorock dir­ec­tion. Rough elec­tric gui­tars, and ana­logue sound­ing drums let you head­banging. It's just incred­ible how ver­sat­ile the music of 'Garek' is. If you like the shout­ing of Chester Bennington (Linkin Park), then the track 'Eve' is yours. The typ­ic­al Electrorock sound con­tini­ous in this song in an epic way.

To put it straight to the point; The song 'Boys Don't Cry' is unfor­tu­nately not a cov­er ver­sion of 'The Cure'. Although I per­son­ally would have loved to listen it in a ver­sion of 'Garek'. I guess that it would fit per­fectly into the concept. Anyway, in this case 'Boys Don't Cry' is a song writ­ten by 'Garek'. This one is sound-tech­nic­ally in a mid tempo range and sounds more dark and mel­an­choly than all tracks before.

But 'Garek' won't let­ting you left with that sor­row­ful feel­ing of 'Boys Don't Cry', and sends you right back to the dance floor with 'Stray'. Club beats and catchy tunes are the basic ele­ments of this gor­geous track.

The song 'Leper' has in prin­ciple the same genes as even the great num­ber 'Eve'. The main dif­fer­ence is that "Leper" dis­pense with the elec­tric gui­tars. But that's okay, because here we can listen to anoth­er side of Garek's music­al tal­ent and vari­ety.

Is Garek's album a king-like debut?

Definitely! We really enjoyed this fresh wave from the US. We are a bit sad that we didn't hear any­thing about 'Garek' the years before. Note to ourselves: "We need a cor­res­pond­ent for Electrozombies in the USA!". Do not waste time and listen to this album imme­di­ately. It is incred­ibly var­ied in the songs, as well as in the style. Conclusion: Finally a fresh breeze for the black scene.

By the way, this album also made it into our art­icle ‘The best Synth Pop and genre-related albums 2017‘. Read now. 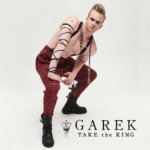