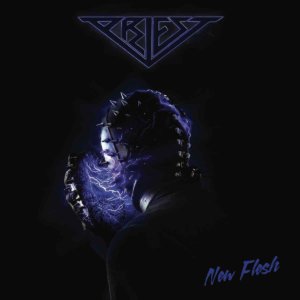 The band ‘Priest’ is one of the biggest and darkest surprises for me this year. The previously released music videos are great, the tracks awesome catchy, beautifully dark and the masks of the band members: A stroke of genius. Behind the masks are the mysteriously band members ‘Mercury’, ‘Salt’ and ‘Sulphur’. Two of them are former ‘Ghost’ members who are walking on new paths here.

Now we have the debut album and after the first listen I already had the feeling that ‘New Flesh’ will be at the top of the best albums of 2017. Let’s take a ride to the bottomless pits of dark Synth Pop that catches closely the spirit of Depeche Mode’s classic album ‘Black Celebration‘. And I know, by this sentence many DM Fans will hate me.

It all starts with the song ‘The Pit‘. The track is a good start to the debut album. A gloomy mid-tempo beat is filled with electric pianos and medieval organs. These are used very subtly, the sound is very modern and contemporary.

‘Vaudeville‘ attracts a lot in tempo and is best suited for the gloomy disco. Many instruments and samples are used in a varied way and provide a lot of dynamism. The singing is fantastic! Despite the distinctive and recognizable voice, the vocals are incredibly variable.

My absolute favourite is the ballad ‘History In Black‘. The Internet is already speculating heavily on the meaning of the song. But I think that the lyrics are open enough for their own interpretation and I guess that each one of us reflects a bit in it.

I travelled with the enemy,
I thought it was my destiny
I’m free of all the lunacy,
I never want it back
My history in black
Lyric line in ‘History In Black’ by Priest

‘Populist’ starts like an early ‘And One‘ song or at least the track reminds me of one, at least until the use of the vocals. The song seems to have brought his musical spirit from the early 90s. It’s a cold shiver on my back for this great song, because it seems so incredibly familiar to me, even though I’ve never heard it before.

80s Synthwave paired with current Darkwave, that’s ‘The Cross‘. Here we find one of the most catchy track of the debut ‘New Flesh’. The track has great hit potential and should not be missing on any DJ playlist in the scene within the next months.

‘Private Eye’ unites darkness and light. Mix ‘Depeche Mode‘ of the early 80s with the ease of ‘Yazoo‘ and ‘Erasure‘ that you can hear especially in the chorus. A tonal combination you have to love. The love of the 80s floats in the subtext as well, but without getting lost in it.

Another shade of darkness

The ‘Nightmare Hotel’ sounds quite different again, because ‘Priest’ relies on more minimalism. Nevertheless, it sounds varied and very exciting. At this point, I would also like to mention that I absolutely adore all warm analog synthesizer sounds so far. The sounds give each song on the ‘New Flesh’ a beautiful density and atmosphere.

Also, the song ‘Virus’ captivates with a beautiful and catchy chorus. Vocally, I am reminded here in some passages to Lauri of ‘The Rasmus’. This is also a compliment to the Priest singer ‘Mercury’. The broad frequency spectrum as well as the tonal pitches of the vocals all sound excellent and punchy.

Creating variety is the biggest talent

Almost in the softer Electropop genre, the track ‘Call My Name’ drifts around. Without question, the song is 100% radio-ready and at the same time dark enough not to look like a foreign object on the album. A really successful balancing act that ‘Priest’ knows how to implement.

A fantastic symbiosis of gentle vocals, close to the vocal range of ‘Fine Young Cannibals‘ vocalist Roland Gift, sonically cold and melancholy, with the warmth of 70s Space Age futuristic sounds creates a sound construct that seeks its equal. A successful completion of this first-class album.

Get this album instantly!

That’s exactly what our scene needs: New Flesh. For me, the debut of ‘Priest’ is one of the biggest surprises of the year. Especially for a debut the stylistic certainty and high quality are outstanding. Anyone who likes dark Synth Pop should definitely have heard ‘New Flesh’. And I hope that the band can be seen at one or the other festival in 2018.

‘New Flesh’ is an absolute and unrestricted buy recommendation. That’s how Synth Pop from today sounds, it knows the roots and knows how to transport them into the modern age. Thanks to ‘Priest’ for one of the best albums of 2017. 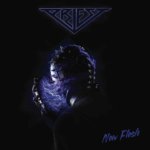