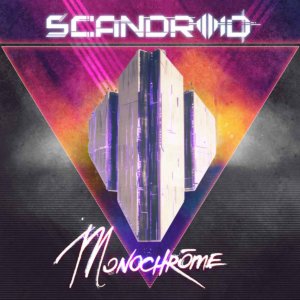 The artist ‘Klayton’ is one of the artists I respect above all for his seemingly endless creativity and power to create music. Not only that, the last ‘Scandroid‘ album is just a year ago, no, this workaholic has realized in the meantime also an album with his Industrial troop ‘Circle Of Dust’ and the alternative rock band ‘Celldweller’.

Including so much output can the quality of the new Scandroid album ‘Monochrome’ insist the test? We are proud to be able to listen to the early promo copy with a few other press colleagues to report back to you.

What can we expect from ‘Monochrome’?

Like an epic 80s action movie the intro begins on the new album. One of the strongest and greatest album intros I’ve ever heard. Respect to the 80s! Admire Scandroid!

Klayton has remained loyal with his project ‘Scandroid’. This is already apparent in the second play ‘Afterglow’, which gives you the security and confidence of an old acquaintance. Despite the classically used 80s drums sound sequence, the song does not act like a stupid repetition. The basic beat is fast, demanding and invites you to dance. Absolutely awesome.

The song ‘Rendezvous‘ was already released as a video and is a real pearl on the album. Stuffed with retro romance, the song flatters a whole decade in an acoustic and lyrical way. The lyrics are a bit cheesy and naive, but that is what makes this wonderful Synth Pop song so special. I love this song!

A tribute to the King of Pop

‘Thriller‘ was/is one of the biggest hits of the King of Pop ‘Michael Jackson‘. Scandroid is paying tribute to the artist, who died far too early, with this great successful cover version. This is not just an ordinary cover version, it is more a fantastic interpretation in ‘Scandroid’ style. I’m sure Michael would have loved this cover.

A more gloomy sound is the title track ‘Monochrome’. A dark and threatening atmosphere of a SciFi dystopia builds slowly. Moody in the mid-tempo range and with distorted voices that sound like robots, Scandroid creates a completely different side of his Synthwave sound.

Scandroid is the new vintage shit

You can really hear that ‘Scandroid’ does not copy or imitate the sound of the 80s. He lives with ‘Scandroid’ the 80s in the here and now. ‘Future Bloodline’ is in principle a modern-sounding Synth Pop song. However, elegantly camouflaged with typical analog synthesizer it sounds from the decade of the Rubik Cube and the Commodore C64.

This is followed by another hit which we could present as an exclusive video premiere. ‘A Thousand Years‘ is definitely one of the most catchy tracks on the album and my personal favourite song on ‘Monochrome’. Just take a look at the linked video, if this has not happened yet.

A colourful firework – The new Synthwave

Every visitor who has already read the one or the other review knows that I personally do not really like instrumental music and that I punish this with a rather poor rating. But this is the way the game is played in our track by track review. All the more surprising is the fact that the instrumental track ‘On The Face Of The Deep’ has tied me to the speakers like an exciting Sci-Fi movie on the screen. An almost magical moment.

With the attitude of a energetic Electrorock song ‘The Veil’ blasts throught the air. In addition to the typical Synthwave elements, powerful electric guitars are also used here, which makes the album a more varied one.

Shut up and take my money

The album title is already somehow misleading. The album ‘Monochrome’ is more like an acoustic colour explosion. Synthwave has never sounded better and more varied than on the current ‘Scandroid’ album.

Apart from the 3 instrumental tracks with only 2 stars, ‘Scandroid’ has delivered an incredible score here. We strongly recommend you buy the album. A better Synthwave album will probably not be in 2017. Big congrats to this masterpiece. 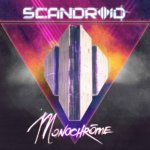