Time to get serious again 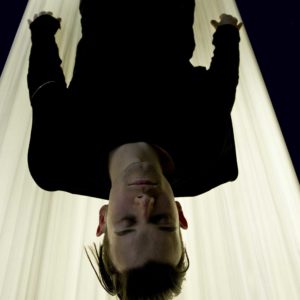 What do you expect from an album that starts with the words: “Everything starts with pain”? The new album by ‘Age Zero’ (Jan Weisbrod) called ‘Age Zero III’ has been a long time awaiting. Already 5 years have passed since the last release and the music of ‘Age Zero’ has not become more cheerful.

Rather the opposite is the case. Melancholy, sadness and dark thoughts are the companions of the new album. Especially the journey to Japan has strong influences on the album, both in terms of content and sound.

The opener “Out Of Pain” is lyrically and musically a whole life cycle. The birth of the first song begins quietly and restrained with a basic beat like a heartbeat. Nothing distracts from the fantastic vocals and you literally stick to the lips of singer Jan Weisbrod. Towards the middle the sound becomes more complex and exciting. In general, the tension is built up very well here. You experience a constant increase until the song reaches its zenith with rough electric guitars and the words “Embrace what you love” are shouted into the microphone.

The song ‘Perfect Desperate Mess’ is about depression and suicide. No later than the second song you realize that this is not a party album. The beginning is minimal and soft strings support the depressed mood until the drums kick in after just a little over a minute. The tempo remains very slow, but the sound is intense. A wonderful song that makes you reflect and leaves room for interpretation.

A musical journey with an educational value

The third track is entitled ‘Aokigahara Has To Wait’. Yes, I also had to google first and this was not my last Google search for the tracks on this album. In brief, the place ‘Aokigahara‘ is a dense forest near Fuji, known as “The suicide forest”, because it’s a well-known suicide site. Well, is the pattern already recognized? Soundwise, the tension and intensity is built up continuously, until it drops abruptly and fades quietly in the last fifth. Not a typical song structure, but that’s what Age Zero is known for. A fantastic, bleak song that gave me goose bumps.

The next song ‘Can Shibuya Girls Cry’ is about the popular trend of the “Shibuya Girls” in Tokyo. A superficial show and fashion world that serves as a tourist attraction. Partly also on immoral ways. The track is continuously clocked in slow tempo (around 80 BPM). Jan’s vocals bring a lot of variation to the song, as well as the rise of noise in the bridge and outro. The noise in the outro reminds me strongly of the outro of ‘I’m Not Afraid‘ from the album ‘Age Zero II‘. Luckily, the bow was not overstretched here and the track ends abruptly.

In the shadow of the valley of death

‘Pieces Of Noise’ has really this discomforting feeling. The monotone beat and chorus ‘Drown the world in your noise’ have an almost mantra-like character. Perhaps it’s just me, the track can best be compared with a typical Martin Gore (Depeche Mode) ballad, only a shade darker and more serious. Towards the end, on the other hand, I am reminded of the early creepy tracks by Marilyn Manson. With distorted electric guitars and horror-like sounds and effects, but on a moderate level. A fantastic combination.

After the tonally very gloomy tracks before, the first tone of the song ‘Shinkansen’ sounds like a single ray of sunlight breaking through the dense cloud cover. But appearances are deceiving. Lyrically we remain with bleak and melancholic topics. The sound of the melody could also come from the ‘Blade Runner‘ movie. It gives the song a sci-fi touch in a subtle way, less dystopian but more melancholic.

Hey, what have we done? Hey, we’ve killed our hearts.
Lyrics from ‘Shinkansen’ by Age Zero

The last song ‘Dark Traveler’ offers a bittersweet song with a tonal, hopeful sound in chorus. Lyrically, however, I rather interpret the inner conflict of a depression. Very subtle in the lyrics even suicide thoughts are hidden. In contrast to that stands the cry for help ‘Don’t let me go’. A song that makes me thoughtful and sad, but a proverb says ‘tears cleanse the soul’. It’s a song that closes the album perfectly.

‘Age Zero III’ is definitely not an album for the dance floor in a club. Further, at a party I would definitely not play a single song of it. But it’s a damn important album if you listen to music alone and have to walk through a mentally dark valley. I think there is no grey area for the album. Either you find it horrible or you love it adorably. It’s up to each person to decide for themselves. If you love the album ‘Metanoia‘ by ‘IAMX’, then it’s a must-have album. For me personally it is one of the best albums I have heard in a long time. 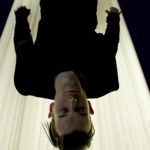