An album that stands out 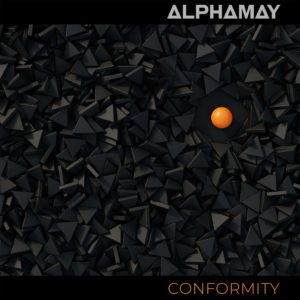 The album 'Conformity' is the 4th album from the German Synth Pop band 'Alphamay'. I know and love the band as far as I can remem­ber since their found­a­tion. Cris Frickenschmidt has always send me the latest releases as a phys­ic­al promo packed with some nice fan extras which I really appre­ci­ate and be thank­ful for. But of course Electrozombies is not cor­rupt­ible, as you can see from the older reviews of 'The Simulation Hypothesis' and 'Twisted Lines'. Both are not bad albums, but still they did not con­vince me 100%. Let's see if the album 'Conformity' can beat its predecessors.

The first notes of the open­er '60 Centuries' build up a good pres­sure. Sound tech­nic­ally the beat blasts some­where between Future Pop and Cyber Goth. The catchy melody is a per­fect intro­duc­tion to the new album 'Conformity'. The chor­us is almost radio friendly. Everything was done just right here. All in all the song sounds more bal­anced and clearly than all oth­er songs before. A great start so far.

In short: The second song 'Reach Out' has a fant­ast­ic upbeat sound, but the vocals didn't con­vince me here. So we jump right on to the song 'Death Is Kind'. Here the whole pack­age is more har­mon­ic again. The bleak Dark Wave vocals fit seam­lessly into the music. Here we hear more typ­ic­al Synth Pop sounds in a refresh­ing upbeat tempo. The dynam­ic between the verse and chor­us offers a lot of ten­sion due to the clear sep­ar­a­tion of pitches and instrumentation.

The song 'Heir Of Eternity' gets a great 80s vibe through the bell-like melody. But in the verse we are more mod­ern and elec­tron­ic­ally harder. The heav­i­ness of the song seems almost weight­less in the chor­us because of the melody and the angel­ic back­ground vocals.

With the song 'Conform Us' I would like to ven­ture a first com­par­is­on in this review. Especially the begin­ning of the song strongly reminds of the sound of Depeche Mode of the 90s. Furthermore, the song exudes a cool elec­tron­ic calmness in terms of sound, but also emo­tion­ally. From the synth sounds one of my high­lights on the album 'Conformity'.

Like the emer­gence of a clear­ing, the song 'Diorama Story' fits into the album 'Conformity'. Cool and clear the way is pre­de­ter­mined for the melody and the beat. At least it feels as if you already know the song and the struc­ture, even though you are listen­ing to it for the first time. But there's noth­ing wrong with that, because it's a simple and hon­est Synth Pop song that's imme­di­ately appeal­ing.

'Caleidoscope' has two faces. First you hear a dra­mat­ic intro (first verse), which wouldn't be more fit­ting for a mel­an­chol­ic bal­lad. Arriving in the middle of the album, that would cer­tainly be some­thing I would have expec­ted. But then it turns out com­pletely dif­fer­ent in the first chor­us and the tempo gains momentum, the basic mood at least remains. In the second verse we fall into this deep gloomy void again and we fight our way for­ward only slug­gishly. Here 'Alphamay' cre­ates a super excit­ing dynam­ic of bal­lad and upbeat chor­us. A sur­pris­ing vari­ety and a great song.

'Silence Of The Youth' begins play­fully and the intro takes its time. I am already excited about the dir­ec­tion the song will take. With the use of the first vocals I have to say that I'm not a big fan of elec­tron­ic­ally distorted/tuned voices. But this subtle robot-like under­tone fits the sound incred­ibly well. So I can fully under­stand the cre­at­ive decision for it. The good thing is, that the vocals in the chor­us get back into the auricle in a nice and clear way.

The track 'Follow Me' is the first Single of the album 'Conformitiy' and was already released in January 2019. The strengths of the song are clearly in the chor­us, the verses and the bridge are admit­tedly a bit weaker.

The second single 'Afterglow' has, I think, the coolest Alphamay music video ever. Bold beats and a sig­ni­fic­ant Future Pop impact make the song extremely dance­able. The used synths revive a won­der­ful old­school dark disco era memory without seem­ing copied. Here they play subtly with clichéd ele­ments of our scene, but 'Afterglow' is 100% authen­t­ic and man­ages to sound independent.

The songs 'Good Old Days' and 'Mirror Moon' play in good mid­field. But due to the album pos­i­tion­ing, the band is well aware of their weak­nesses and strengths. So I don't have to go into this further.

Are Alphamay in perfect harmony now?

The album 'Conformity' is for me per­son­ally the best pro­duced and most var­ied album of 'Alphamay' so far. Of course there are still a few edges here and there where you lit­er­ally bump into. This may be due to my own taste in music, but at least I can see a steady increase in music­al per­form­ance. If you liked the last 'Alphamay' albums well, then you can take it without hesitation. 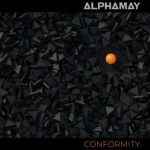