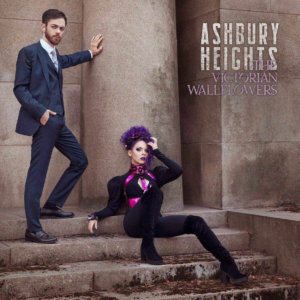 Ashbury Heights on a new level

The new album ‘The Victorian Wallflowers’ is an awesome sequel of ‘The Looking Glass Society‘ by the Swedish Synth Pop band ‘Ashbury Heights‘.

Catchy tunes gets a new weight here! Because Anders Hagström and Tea F. Thimé manage to electrify and at the same time, to give the feeling of being able to relive an old, recovered favourite record. What a wonderful combination.

The first track ‘Headlights’ has a marvelous hook that you can’t ignore! The up-tempo speed takes you on a trip to a Synth Pop heaven of endless, glittering dancefloors. You might think Dubstep is so 2010, but ‘Ashbury Heights’ weaving a few Dubstep elements magically into this fantastic track.

Bright as a supernova burns the second track ‘Firebird’. This fantastic song was previously released as a lyrics video. The video itself is unfortunately not that spectacular and rather a flop. It’s really pity, because I think the song deserves a great aesthetically pleasing music video.

The future is just a word, I’m ignoring every warning
Lyrics from ‘Firebird’ by Ashbury Heights

If you thought that only ‘Pet Shop Boys‘ could create long song titles, then ‘Ashbury Heights’ will teach you a better one with the track ‘If You’re Shooting With Your Left It Means The Right Side Is Working’. The mood in this song is bleak and depressing, but also damn captivating. A welcome break after the first two Synth Pop anthems.

The song ‘Ladders’ takes a bit of time before it really takes off. But at about 1 minute 30, it catches you like lightning and not only the hip resonates. The structure of the song is very energetic.

Do you remember the cheesy teen comedy ‘Weird Science‘? The title track from the movie was made by ‘Oingo Boingo‘ and had the same name. Strongly inspired by this 80s classic is at least the lyrical phonetics in the chorus. If you hear it you will know what I mean. However, this is great combined with almost 90s Eurodance Beats and Acid Samples.

It is the diversity that makes life colourful. Does not really sound like Goth, but I can say that at this point. Because every other song on ‘The Victorian Wallflowers’ is unique and very different from the previous track. This also applies to the song “Missing Mr Marchie”. The sound melody hovers somewhere between hope and sadness. Furthermore, its made with a sweet, dreamy injection of sounds that leaves no heart untouched.

‘Waiting For The Fall’ goes straight to the front and calls for dancing. No complicated song structures disturb this track that was created for the dance floor. A great upbeat tempo with fantastic duet vocals and a lot of buzz in the lower frequency range. Start to dance now!

‘Tomorrow Is Dead To Me’ is already a strong announcement. A teetering beat and techno-like hi-hats make the song on the album extraordinary. The super strange sounding bridge is wonderful and hard to describe. Fairground-like dubstep at the bumper car ride might hit it. If you know a better description, write it in the comment section below. But don’t be scared, because the whole thing is packed in a great Synth Pop song.

The dark side of Ashbury Heights

Like a horror movie, the song ‘Long Lost Dead And Gone’ begins. The dramatic composition and setting are almost obligatory. In the background, you can hear a ticking grandfather clock, which generates a certain intensity due to its constant ticking. Only the chorus lifts the dark mood up a bit but never gets too euphoric.

The first few seconds of ‘Domino’ remind me strongly of the naive, early sound constructs of ‘Depeche Mode‘. Right away, a bit of nostalgia spreads out on me. But the song cleverly manages to turn into modernity with a pumping bass beat.

‘The Mess I’m In’ sounds like a modern lament. Peppered with many varied passages and dynamic changes, ‘Ashbury Heights’ challenges us to think ahead of the usual learned Synth Pop sound. Because here again many different elements mix with catchy Synth Pop sound. Despite the typical style, monotony never arises.

With the extremely bleak, melancholy ballad ‘Corridor’ brings us Tea F. Thimé back on the hard ground. Between the aural tragedy of Kate Bush‘s ‘Running Up That Hill‘ and rough Dubstep transitions ala ‘Skrillex’, the track drills through your innermost pith.

Until the last song ‘Journey’ the album shows no weaknesses. I’m excited. With a breezy, lightweight Synth Pop hit, ‘Ashbury Heights’ finish their fourth and probably best studio album yet.

‘The Victorian Wallflowers’ is a must-have in 2018 for those who love Synth Pop. Here ‘Ashbury Heights’ have created a milestone in their career so far. Definitely, the album will take a high place in the best Electrozombies albums 2018. Congratulations!

If you already had a chance to listen to this masterpiece, you can write your own track by track review with star rating in the comments. Check out this new feature now! 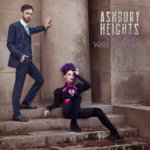 Ashbury Heights – The Victorian Wallflowers
Headlights
Firebird
If You’Re Shooting With Your Left It Means The Right Side Is Working
Ladders
Science
Missing Mr. Marchie
Waiting For The Fall
Tomorrow Is Dead To Me
Long Lost Dead And Gone
Domino
The Mess I'm In
Corridor
Journey
Recommend
Headlights
Firebird
Waiting For The Fall
Weak
(Nothing to report here)
4.2
Awesome