Industrial Rock on its way to new worlds 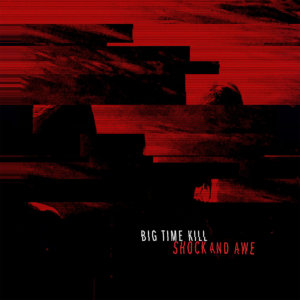 Fresh on the market but not fresh to the world

Boston-based 'Big Time Kill' cre­ate in their debut album 'Shock And Awe' not only songs, they cre­ate worlds. This may be due to the fact, that one part of this Industrial Rock Duo, Adam Schneider, makes his liv­ing by cre­at­ing music for video games. So some of you might have heard his work before without even know­ing it.

For my part, this was one of the most inter­est­ing records I've had in hands recently.

A hitchhike through the decades

Nonetheless, I can't deny the influ­ences, those two guys incor­por­ated in their record. There's Nine Inch Nails, INXS and a wild ride through 80's instru­ment­a­tion, 90's Dance and 00's heavy Noise. Each song takes me through dif­fer­ent states of mind, hosts quite inter­est­ing turns and devel­op­ments.

To be true, this over­charged me when listen­ing the first, even the second time. But what kept me and made me dive into the album was the fact, that it's nev­er bor­ing and some of the hook-lines are simply awesome.

Starting off almost med­it­at­ively, 'Carbon' drags me slowly into the dark­ness to come. A dark­ness that is sprinkled with lofty key­board, bear­ing almost a touch of sci-fi. About the middle, the song slows down even more, nearly into zero grav­ity, but only to knock me hard back into the next real­ity with a whip­ping noisy beat. In the end, 'Big Time Kill' let me float in their star-spangled heav­en towards the next Class M planet.

Those who think at 'Body Talk' of 80's Soul Combo Imagination are dead wrong. This is where the noise sets in. Sawing, noisy gui­tars and a ham­mer­ing beat accom­pany the first lines adequately:

I've got a ham­mer, I've got a saw, I've got an image of who you are
Lyrics from 'Body Talk' by Big Time Kill

'I don't care any­more' is prob­ably the funki­est little 'Fuck You' I've heard in quite a while. INXS influ­ences are hardly ignor­able, but I simply love the funky bass and organ con­trast­ing the more shouted than sung chor­us. Cumulating into con­trolled sound chaos, the bridge matches won­der­fully the dis­ordered state you're actu­ally in when you just don't care anymore.

Now, this is crazy. In 'DTs' such a vari­ety of styles is mixed, that my tiny, old Crossover-Heart made a jump. A rap-like inton­a­tion, heavy gui­tars set against a 90's Techno-ori­ented clean float­ing sound evolving over mid-strophe, then a gui­tar solo worthy an easy Prog-inter­mezzo and then a dark, sag­ging spoken part. I can't even con­cen­trate on the lyr­ics, because there's SO MUCH hap­pen­ing here. Guys, I have to say

… it feels like love
Lyrics from 'DTs' by Big Time Kill

Miami Vice confined to the beatbox

After this roller­coas­t­er­ride, 'Don't need you' may appear close to Easy Listening, but don't you go wrong. A totally men­tal sax­o­phone roughs me up here, not only because I really dis­like sax, but because it also ads an 80's‑Miami-Vice-On-Speed-Madness to the oth­er­wise very straight for­ward beat. The vocals tend unmis­tak­ably towards Trent Reznor of NIN.

I keep hold­ing on, I can be good, I can see good and feel good
Lyrics from 'Evil' by Big Time Kill

The high gui­tar spider-tab­bing in the back­ground ads depth and gives this airy elec­tron­ic part an earthy ground to draw its strength from. This is the abso­lute high­light on the album – I love it so much, that I keep on ear­worm­ing myself on pur­pose by just remem­ber­ing the chorus.

The intro of 'Shock and Awe' reminded me of early Korn-Intros, although of course much more elec­tron­ic. Parallel run­ning melody lines, pulling beats and heavy gui­tars push me into the remin­is­cence of NIN again. But still, I like 'Big Time Kill' much bet­ter, because their sound lacks the NIN-typ­ic­al des­per­a­tion. It's heavy, it's power­ful, but there's still pos­it­ive energy in it all. The sheer amount of dif­fer­ent sounds to explore in this song is overwhelming.

Like a train 'Answer' is rolling in. More coal is shoveled on this beat-train in the chor­us, that is so melodi­ous I can't do else but swing along although lyr­ics wouldn't suggest:

You are the answer – can I be your God; You are the can­cer – you can't cut me out
Lyrics from 'Answer' by Big Time Kill

'Echo Heart' pulls me emo­tion­ally into a dysto­pi­an scenery, employ­ing low noise, wind chimes and pauses that build up a cer­tain ten­sion. A much slower tempo is set in the main part of this song, which lets me glide through my ima­gin­ary grey dus­ted land­scape full of lost souls, includ­ing my own.

'Overload' is what it's titled. To me one of the few weak­er songs on the record because it's not as struc­tured and clear as to where 'Big Time Kill' want to go. You might argue, that this is the plan, but I simply don't feel it. To me, it feels like Powerchord-Hammering known from a sac full of Melodic Metal Bands.

The record ends with the same mood as it star­ted: 'Failed Regeneration' pushes me into a dark worm­hole. It feels like sit­ting in a gal­ley and hav­ing to row back into my own real­ity. I don't have the impres­sion of an actu­al song but much more of a Outro to a jour­ney I have taken togeth­er with 'Big Time Kill'.

Boy, what a trip. 'Shock and Awe' is one of the records I have to sit down to and listen with full atten­tion. It is like enjoy­ing a good Prog Metal album. Only it doesn't have any­thing to do with Prog. I had a hard time get­ting into the com­plex­ity, but it was totally worth it as I drew real energy just from listen­ing to this awe­some debut. So, sit down, drink tea (if you want to with Schnaps in it) and listen to 'Big Time Kill'. 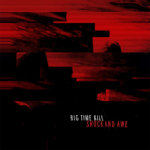