Next Gen of Industrial. Or Metal? Or both? 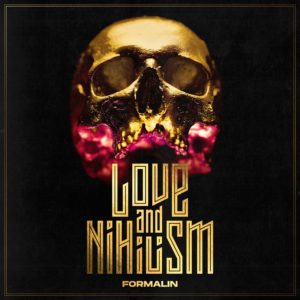 Formalin’s 4th album ‘Love and Nihilism’ surprises with an uncompromising approach on Industrial and Metal that has long been overdue and closes a gap for all of us who have been in love with electronic music as well as Metal and Alternative pretty much since the 90s.

But first thing’s first: as a graphic designer I really appreciate a congruent design approach and Formalin delivers this picture perfect. Actually a lot of bands should have a look at this best practice of brand building. The cover artwort of the first singles and the album cover lead a straight path with the most iconic of nihilistic imagery, a human skull. And what you see is what you get: the shiny metallic skull visual comes in for the close to obsessiveness produced electronic parts, colour and typography leading the way to the realm of modern Metal. So let’s dive right in!

Dirty drums and the darkness within

What I always missed in Formalin’s work was a certain roughness, a bit of dirt that they now incorporated with the help of their new drummer Cosmo. It really makes a difference if you play a heavy sound on accoustic drum or on digital ones and this is not opening a discussion whether ‘real’ music is better than ‘digital’, it’s just different. Still, the electronic parts are equally important and create elements of suspense that are much stronger than ever before in Formalin’s music.

This combination is what makes the album really special: classic Metal elements and song structures are married to Electro and abstract Industrial noises which creates a powerful yet desastrous air that matches the lyrics well. Thematically the record is a mixture of introspectives and stories about dysfunctional relationships – both analog and digital.

The record opens rather spherical and slow, with heart beat rythm in the background and openening the stage for the right-in-your-face-darkness that lies ahead. The title track ‘Love and Nihilism’ almost has a hint of Progressive to it as fat guitars, perfectly timed off-beat drum pauses and a dramatic chorus really highten the expectations.

‘Faded‘ is the second single and the composition reminded me straight away of the title track to ‘American Gods’ crossed with the heavy crawling sounds of early Pantera. But it wouldn’t be Formalin if they didn’t integrate a certain outer space feeling already indicated in the bridges. It is brought to a height in the last part of the song when you really get a notion of floating in the vast nothingness like stardust in zero gravity – totally epic!

Lyrically this is as life-affirming as it will get on the album.

Next, get ready for a punch in the face. ‘Tear Down My Prison‘ was my instant favourite. It was the first single upon which I was already excited for the longplayer. Imagine Nine Inch Nails squeezed into a blender with Clawfinger (especially the base line) and a hint of Alice Cooper. The energy that expels out of every note makes you want to go out into the next mosh pit and have some fun. Of course this is also exactly the kind of energy so deeply craved for in the lyrics in order to escape the selfmade cell walls in which the narrator is caught with his feelings that – obvious to him – will be destroying him long term.

More technical inspired is ‘Rush’ which derives from the more technical toppic of social media victimism and fast media producing and consumption. Tom spits out the lyrics like Clawfinger in their best days and also the howling guitars take me a bit back to the 90s. The chorus almost sounds like a spiral sucking you down into the dark vortex of self presentation without ever filling the void of real company and purpose. The dynamics vary here widely emotionalising this crazy hunt for attention. There’s a soaring noise hovering from left to right (if you listen via headphones it’s quite absorbing) that mimicks the moment of wide-eyed disorientation perfectly.

There’s a heart in every Metalhead

‘Iron Strings’ is the ‘ballad’ of the album. The slowest but nonetheless involving piece contradicts glittery sound cascades with one of the darkest lyrics on the record.

The beat is dragging slowly, heavily like the end of the failed relationship depicted in this song. Despair, loneliness and futility are the dominating imagery here but the afore mentioned glittery keyboard sounds also promise a leap for the future, more than just a light at the end of the tunnel. There’s a very retro-electro vibe – a highly interesting construction that widens the meaning of the lyrics through the instrumentation.

Big hands for a model graphic design job: cover artworks up to now

Even the design is a melting of the two worlds: clean and abstract as a symbol for Industrial, crass colors and haptics of the visual for the rougher Metal side – both sharing the love for the ultimate nihilistic accessoire, the human skull.

A tribute to the genres we love

The variety of musical angles on this record is a sheer delight: ‘Warzone’ catapults you into an ego shooter with more-real-than-reality graphics. The song sets right off into high alert: snippets like laser guns zooming in and out, staccato intonation combined with a female ‘level voice’ as if in a computer game rocket your adrenaline up to the sky. Slashing drums powered up by driving guitars build up a highly energetic setting that you can almost feel sizzling on your skin.

On the other hand ‘Devil‘ employs a very classical rock scheme in rythm and song structure. You can even find a cowbell in the beginning which made me smile because it is so unexpected. I’m a bit reminded of ‘Poison’ by Alice Cooper, but on a much higher energetic level although thematically quite comparable.

The beat has a certain swing to it but gets contradicted in the bridge part by its electronic translation that is completly straight forward. In the end a wonderfully over-amphasized guitar solo closes the classic journey and leaves every Hard ‘n’ Heavy happily grinning behind.

The end is nigh!

The next one comes in quite heavy-hearted. ‘Down Low’ is a low tempo piece creating the feeling of walking alone on Mars, heavy footsteps leaving imprints forever. A mantra-like chant and short pockets of silence in the composition emphasize the vacuum around you: there’s nothing you can do to prevent the lifestory about to happen right before your very eyes. Ghostily noises in the background support the hollow, helpless feeling even more.

The closing track ‘Psychocandy’ lets you glide over a short electro-retro rainbow into the dirty aggressivness pushing you back into overdrive mode. The topic of social media attention society is discussed from a new angle with a view on the user and his/her power over the content creator. Tom’s distorted voice underlines the sickness of the whole machinery and its shining facade is represented by cascades of beautiful yet somehow awkward electronic sounds. The song plays mid-tempo but the distortion and some 80s big wave keyboard tunes give it a huge presence.

Overall I’d like to add that although the lyrics are really really dark the record doesn’t leave you with a negative or devastated feeling. It’s the other way around: for me, for example, this is my perfect workout playlist. There’s no better motivation for a set of cardio than ‘Love and Nihilsm’ for me! Sounds funny until you try it yourself. And I have to admit that ever since I started to listened in I keep running on earworm energy most of the time. About ¾ of the songs just stick inside your head and you silently sing along and enjoy yourself.

Be sure I could have written a whole doctoral thesis about this album because I LOVE IT! In every nook and cranny I see the musical influences of my own favourite bands and genres peek through. But Formalin is never satisfied by just honouring them – they make something new out of it. And it is something, that is always Formalin, always a thing only they could have created.

As I already stated in the beginning, this is a new spectrum for both Industrial and Metal. I’m more on the Heavy side of things so I take this as a new generation of Metal, a new open-mindedness I can’t but celebrate, a rejuvenation of Metal that is so overdue I have no words for it. Now, fellow Metalheads, leave the limiting idea of ‘true Metal’ behind, it’s time to hear the next Gen!

And now, fellow Electro pals, get ready for a more energetic, deeper kind of Industrial that will swipe our dancefloors and knit our communities closer together! If you like to get more deep insights about this album and the current status of Formalin read now ‘The deep-dive interview with Formalin‘.

Track by track rating for: Formalin – Love And Nihilism 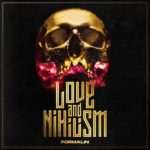