Home
Music
Review
Kat Von D – Love Made Me Do It

Kat Von D – Love Made Me Do It 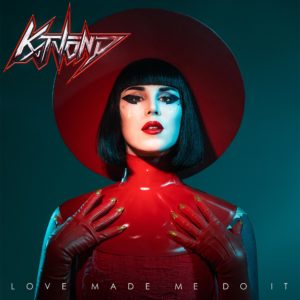 I must admit I have always admired ‘Kat Von D’ as a person. And probably like most people, I know her from the MTV shows ‘L.A. Ink‘ and ‘Miami Ink‘. But that was a long time ago. After that, there is a big black hole for me, where I haven’t sadly heard anything from Kat.

In the last few years I noticed her again as a featured act in our electronic music scene. For example, on ‘Stardust‘ by IAMX, ‘Black Blood Red Kiss‘ by Gunship and ‘Black Leather‘ by Prayers. So when I found out in May 2021 that she will release an album I was curious, but also sceptical. But I liked the first music video ‘Exorcism‘ right away and wanted more! But slowly, read here my impressions and thoughts about the first solo album of ‘Kat Von D’.

To start a solo album with a ballad takes a lot of self-confidence and courage. These tend to be the songs that are placed at the end of the record. The song ‘Vanish’ is not the strongest song on the album in my opinion and I would never have chosen it as the opener. But it is a very emotional song that also has its moments of intensity. It also definitely creates a dark, melancholic gothic basic mood. I have a lot of respect for the decision to start the album this way.

The intro guitar in the second song ‘Enough‘ and the following soft vocals of ‘Kat Von D’ is so 80s goth attitude. Simply: Wow! That’s exactly how it goes through the whole song. Warm analogue synths, a quite simple and familiar drumbeat, beautiful typical “ZIIIIP” synth sounds and a magnificent chorus gradually whip the track to its climax.

Yes! Yes! Fucking yes! The song ‘Exorcism‘ is a real dark Synth Pop pearl with so much 80s vibes that I feel like a teenager again when listening to it. A nice mid tempo and a juicy bassline sweeten the beginning of the track and the whips propels the song on the right course. Synth sounds like from old action movies provide the tension, while the drums are tuned deep, playing up and down the scale almost cliché-like. Vocally, Kat Von D is really great here and fits perfectly into the song. At this point, congratulations to the mixer who mastered the song.

On the song ‘Protected’, ‘Kat Von D’ brings a well-known vocal partner on board. In a duet with ‘Peter Murphey‘ (Bauhaus) he supports the song with his deep, calm voice and creates a welcome variety in this ballad. Side fact: On first listen I thought the vocals were coming from ‘William Control’. I think the two singers are at least close. I would describe the sound as calm but demanding. Here and there are drop sounds implemented that remind me of the deep, silent and also merciless ocean. The lyrics “take your journey, protected soul” leave a bittersweet aftertaste and make me feel uneasy. This definitely proves that the song comes across authentically and touches you emotionally. Well done!

The song ‘Fear You‘ is another emotionally charged ballad on the album ‘Love Made Me Do It’. Musically, the song sounds somewhere between modern Dark Pop and those typical 90s Pop ballads. Lyrically, however, the song is more profound and melancholic than many of its kind. The song gives me goosebumps and a thoughtful mood.

I’m chasing you down this trail of tears […]

And I, I have so many questions
I don’t want the answers

Lyrics from ‘Fear You’ by ‘Kat Von D’

Also on the following song ‘I Am Nothing‘ we stay in the same tragic, sad mood. ‘Kat Von D’ demands a lot from us here, because the song is emotionally challenging. The song is accompanied by a nostalgic piano and a blues vibe. Lyrically, the break up with a partner is the thematic focus here. The words are relatively shallow and avoid complex metaphors, so that everyone can sympathise. At this level, it’s nice and refreshing. So, if you are in the mood and like soulful sorrowful songs.

The part where goths starts to dance

‘Lost At Sea’ makes us want to dance again, at least in terms of tempo and beat. Let’s at least say bounce along. Of course, the proverbial title already says that the song doesn’t exactly describe positive feelings or situations. I really like the song and I like the extremely punchy chorus that makes you sing along already after the second listen.

The song ‘Pretending’ enters the race with an extremely strong Synthwave impact. The 80s vibes literally blast out of the speakers and it sounds really awesome. If the song had been released in the 80s, ‘Kat Von D’ would be on a par with artists like ‘Pat Benatar’, ‘Kate Bush’ or ‘Kim Wilde’. The song is 100% suitable for dancefloors and radio. For me, one of the strongest tracks on the album. Thanks for this.

The song ‘Easier Sung Than Said’ cleverly pretends to be a ballad, but then really takes off. However, throughout the entire tune, the speed is changed again and again and again. This creates a lot of dynamics and builds up a fantastic tension. An absolutely great song, which is a unique selling point on the album ‘Love Made Me Do It’ because of the many tempo changes. I also particularly like the frequently varying synths used here.

‘The Calling’ is the grand finale on the album ‘Love Made Me Do It’. Again a bit quieter, but fortunately not the typical piano ballad. Somehow I think the song would fit very well in a film soundtrack. Probably because of the epically full sound of all the instruments you get bombarded with here. Including the powerful vocals of ‘Kat Von D’ which unfolds its full potential especially in the chorus. The spoken voice samples in the bridge also contribute to the mood of a film soundtrack. They sound like they come from a telephone receiver of a classic noir film.

First of all: ‘Love Made Me Do It’ is an absolute grenade as a solo album. The album is extremely varied in tempos, moods and genre influences, but always remains beautifully dark. I like that. I know that ‘Kat Von D’ wrote the songs over many years. I hope that she still has a few songs in the pipeline and that the follow-up album won’t take a decade to release. This may sound a bit selfish, but yes, I am waiting for more songs from ‘Kat Von D’. I have already ordered the album ‘Love Made Me Do It‘ and if you have read this far, I strongly recommend you to buy it too.

Track by track rating for: Kat Von D – Love Made Me Do It 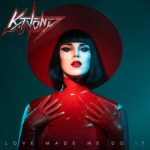 Typical album cliché list for: Kat Von D – Love Made Me Do It