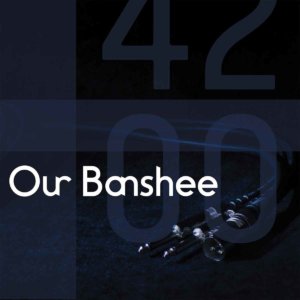 The debut record from Our Banshee is a great record. It is danceable and evokes cold desolate feelings, fitting it into the EBM/Darkwave genres. The band is a synergistic combination of Agi Taralas’ (Cascade Falls) singing with Stefan Bohm’s (Pzychobitch, Nullvektor) industrial overtones. The duo have only recently started the project Out Banshee, but have been creating music together on and off again since 1992.

‘4200’ is a great record that takes some warming up to, before falling in love. It is a mixture of Electropop synthesizer beats, Industrial samplings, cold melodies, and a variety of vocal techniques that range from electro-industrial harshness to melodic ballads.

The first half of ‘4200’, is mostly populated with good Electropop beats, some more melancholy than others, all while evoking a cold industrial feel. The middle of the album becomes slightly one note at first listen, but after a few times through you start to appreciate the electronic subtleties. I can’t get some of these songs out of my head. The final three songs are masterpieces, perfectly balancing vocals and melodies.

The record opens with ‘Christ’ that starts pretty brooding, but then quickly makes you want to move. It has catchy beats and an earworm chorus. The album then moves into ‘Devious’ which is in the same vein as the opener with another catchy chorus.

Next up is ‘The River.’ It’s much more brooding than its predecessors, evoking a cold desolate feeling both musically and lyrically, talking about winter closing in. This makes it the perfect soundtrack for those fall and winter months.

And the birds have ceased to sing, while the winters closing in, and the raid will soon begin
Lyric line in ‘The River’ by Our Banshee

The tempo picks back up and the club vibes come back with ‘It’s Not Real’ and then transitions into the only German language track on the album, ‘Wenn Die Erde Bebt.’ This song is up-tempo and industrial, ending with spoken word samples.

The earth shaking tune then transitions into ‘Hope & Despair’, which perfectly characterizes the song. It starts off broody with a feeling of sorrow, but a few sections are sonically more positive, giving you hope everything will be alright.

‘The Answer’ and ‘You Had It Coming’ continue similar artistic trends from the opening tracks.  ‘B2B’ is a standout. At first it might seem out of left field. It opens with a sample of children singing and then has more aggressive vocals, closer to Aggrotech, but still has the up-tempo beats that characterize the rest of the album.

The cold has come to stay

The last quarter of the album is where the duo really shines. All of the remaining songs have a cold, desolate feeling, similar to ‘Hope & Despair’. They’re coated in melancholy, making you feel like you’re standing alone staring out on an isolated arctic tundra.

‘Undone To The Light’ is along the lines of ‘Hope & Despair.’ More melodic and tonal than the previous few songs. It has an opening of synthesizer beats that set the atmosphere for the end of the record.

‘Down & Out’ rocks an 80s feel with the synthesizer stylings. The chorus is call and answer, making it easy to sing along to but the song is still panged with sadness that makes it beautiful.

I never listened to you at all,
I’m never missing you at all,
And when I happen to be so far away from what I wanted I’ll be giving it all,
And strike that feeling down and out
Lyric line in ‘Down & Out’ by Our Banshee

‘Endless’. I love it. It’s got a groovy feeling and you really get to hear Taralas’ talent in this slower song. This song could be at home as the 10th track on Depeche Mode‘s Violator.

Overall, this is a solid debut album that should get into the collection of anyone who likes cold music with industrial subtleties and killer vocals. 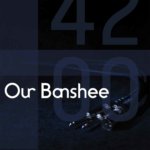 Our Banshee - 4200
Christ
Devious
The River
It's Not Real
Wenn Die Erde Bebt
Hope & Despair
The Answer
You Had It Coming
B2B
Undone To The Light
Down & Out
Endless
Recommend
The River
Endless
Weak
(Nothing to report here)
3.8
Great debut