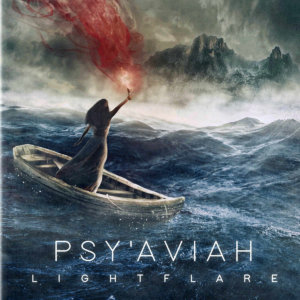 Lightflare by Psy’Aviah is a dynamic and diverse album that will have you hooked from the first song. Belgium based Yves Schelpe has produced another fantastic album as Psy’Aviah.

He has assembled a range of talented vocalists that breathe their own unique light to the tumultuous soundscape of Lightflare. The album is an emotional journey from depression into hope and I am definitely long for the ride.

The albums open with Lost At Sea. It is a powerful track with Mari Kattman contributing some truly dynamic vocals that complement the rhythms swirling around them. It sonically reflects sending a flare from a skiff lost in a swirling and tumultuous ocean, echoing the beautiful cover art.

Aftermath starts off muted with vocals, from Ellia Bisker, and music that sounds like you are hearing the track through a small tinny speaker. But then the sound opens up into rich audio with sultry, folksy vocals steeped in emotion that will have you swaying to the beat. There is something hypnotic about Aftermath that leaves you wanting more.

The Great Disconnect is a really interesting song. It has 1920s style, jazzy vocals over a subtle synthesizer, transporting you back in time to a speakeasy. However, the lyrics tell a story about feeling disconnected from the world around you because of the encroachment of technology. The Great Disconnect is desolate tone but rich in feeling. The music video perfectly complements this feeling, as it was filmed in an abandoned town.

Sound Of New brings us crashing back into the future with a catchy upbeat song. The music has a solid groove with fun guitar riffs. Halfway through, the song breaks away from the up-tempo beat, has a synthesizer crescendo ramping back into the chorus in full force.

A Change of Direction

In The Sound plays around with a totally different style from the first few songs, with rapping during the verse and singing during the chorus. The music perfectly complements this style with a distorted bass sound and record scratch noise. It’s funky and I dig it. Even though I’d classify this song more as hip-hop than synthpop, it doesn’t feel out of place on the album. The music is clearly Psy’Aviah and the chorus has clean, understandable vocals.

In The Sound flows into For Myself, which is another killer song on this incredibly diverse record. The synthesizer is super catchy with a beat that’ll have you bouncing. It has a nice mix of a sonically harsher chorus with clean understated verses, balancing the song perfectly. The protagonist in the song talks about learning to say no and to do more things for himself. This theme resonates with me. I, like many other people, frequently say yes to doing things for other people, but this song is a reminder that sometimes you need to do things for yourself. In The Sound is a great motivational song that will stick with you.

Into the Pits of Despair

Heavy Heart brings back our talented opening vocalist and returns the feeling of the album to a more subdued state. It has deep sad lyrics and a pervasive sense of melancholy, but up-tempo music that keeps you grooving. A feeling of hope starts to seep through the edges of the desolate sonic landscape that Psy’Aviah is building on this record.

I should be lucky to be alive, but why do I have a heavy heart
Lyics from ‘Heavy Heart’ by Psy’Aviah

Next up is Reboot Reset Relay. The track is dance-y and up-tempo, but the lyrics remain sad and on theme from Heavy Heart. The song is basically a love letter to robots, romanticizing becoming emotionless and removing painful memories. The vocals performed by Fallon Nieves fit in well with the lyrics. They’re more staccato and flat echoing the robotic themes.

The theme of emotionless is maintained in the next song, Ghost. Male vocals, performed by David Chamberlin, serve as a foil to the female vocals in the previous song. The lyric content is similar to Heavy Heart as well, revolving around being emotionless in a sea of chaos and pain. The style of this song is EBM with a harsher industrial undertone, highlighting the struggle of attempting to erase emotional struggles through self-medication. Ghost has dark themes and dark music and I can’t get it out of my head.

And Climbing Back Out

Lonely Soul has a more hopeful feeling to it than the previous songs. It feels like the protagonist is slowly pulling themselves out of their desire to be emotionless. The beat is laid back and reminiscent of trip-hop music.

The last quarter of the album is comprised of shorter, up-tempo, hopeful sounding songs. Plan B, keeps the laid back vibes from Lonely Soul but goes deeper into trip-hop. This track continues the upward trajectory in optimism present throughout the later part of the album. You feel like you’re floating on a cloud while listening to the ethereal music that is beautifully paired with Kyoko Baertsoen’s vocals. Next up, Game Changer, is definitely Electrorock. The positive feelings continue and this song could (and should) be played in clubs. It’s up-tempo and gritty, just overall a lot of fun.

The album closes out with Under The Rain and Mr. Vanity. Under The Rain starts of quiet but with a driving beat. The song progressively adds layers of sound with vocals, synthesizer stings and other electronic tones. Under The Rain builds to a crescendo and leaves you wanting more. The final song, Mr. Vanity, is the clubbiest on the record. It has a lot going on with modulated vocals from Fallon Nieves behind a robust soundscape.

Stop the illusion, stop the insanity, you’re not some hero, now are you Mr. Vanity
Lyrics from ‘Mr. Vanity’ by Psy’Aviah

All in all, this album needs to be in your collection. It will take you on a journey through killer synthesizer sounds and emotionally charged lyrics that will take you to the depths of despair and bring you back out. And if you can’t get enough of Lightflare, like me, you’re in luck.

Aside from the fantastic back catalogue of Psy’Aviah, the deluxe edition of this album has 15 great remixes and a recently released EP called ‘Looking for the Sun’ has some new material and even more remixes. I highly recommend you check it out once you come down off of the musical high that Lightflare induces. 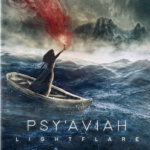