Welcome to the real world 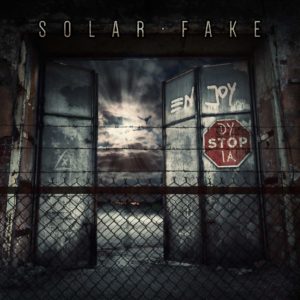 Solar Fake’s new album ‘Enjoy Dystopia’ is to be released on 12th February and I can’t believe it’s been more than three years already since ‘You Win. Who Cares?’. Last year’s events have probably shaped and influenced ‘Enjoy Dystopia’ in a particular way and what can I say? At least something good came out of 2020 with this album!

You can expect the typical Solar Fake mix of harsh beats, Synthwave melodies and in-your-face lyrics that makes every single one of their albums worth listening to, only this time, there’s a little surprise in store for us. Just like the album title and the very fitting artwork promise, the ten tracks on ‘Enjoy Dystopia’ invite us to have a closer look at the different shades of our dystopic, destructive and unmerciful society.

‘You need the drugs’

The album opener ‘At Least We’ll Forget’ is a perfect introduction to the dystopic world described throughout the whole album. Its lyrics picturing people destroying themselves while abusing of and eventually taking others down with them, the song’s pace and musical structure remind me of the overall style on ‘Another Manic Episode’. I could very well imagine this song as an opener for their next tour or a festival gig.

You’re my destruction, get out off my head
Lyrics from ‘At Least We’ll Forget’ by Solar Fake

‘I Despise You’ takes up the same theme of ‘At Least We’ll Forget’, but in a different way. Up-tempo beats vary with a piano melody in the chorus and the bridge, which makes the overall atmosphere of the song, despite the very direct and in-your-face lyrics, less aggressive but rather bleak and sad. The voice distortion in the bridge stresses this feeling and reminds us that hatred and despise can be too strong to forgive anything.

‘This Pretty Life’ was the first single to be released and offered a perfect sneak peek to the album’s topics. The song accuses the abundance of drugs tempering with our brains, making us unable to make out what is real and what is not, while building our perfect little world of fake emotions, relationships and feelings. While the original electronic version is undoubtedly very good, I can dearly recommend listening to the piano version on the single release because it gives the topic a whole different and more dramatic streak.

This pretty life – a shattered vow, and nothing is left to blow
Lyrics from ‘This Pretty Life’ by Solar Fake

The next song ‘Arrive Somewhere’ takes up speed again with its beautiful Synthwave elements and faster club beats. Also, we can hear a few piano sounds here and there, seeming to underline the resolve and hopefulness in the lyrics: No matter how heavy the clouds may lie on our heads sometimes, there is always a possibility to step forward from the wall we’ve been retaining ourselves to.

With the next song, we are brutally torn out of the beautiful dreamy atmosphere of the previous track. ‘Es geht dich nichts an‘ (= It’s none of your business) is the only German song on this album and I was positively surprised about how well it works. Sven Friedrich’s voice sounds a lot different here, especially because he is not really singing the verses but rather speaking out the words in quite an aggressive style, which fit the lyrics very accurately. His spitting out the words slightly reminded me of ‘Fuck U’, a bonus track on ‘You Win Who Cares?’.

The overall style of ‘It’s Just Who You Are’ comes off a lot softer than the previous song with a more minimalistic and yet interesting style. Percussions and a few synth elements in the background open up to a faster chorus that does not hold as much force or aggression compared to other songs on the album. According to Sven Friedrich, the second single of the album “is about unpleasant and slimy people who permanently try to manipulate their environment“, and the lyrics do indeed remind us to take our distance from these manipulative people trying to mess with our brains and drain our energy.

If you missed stronger beats so far, ‘Trying Too Hard’ won’t disappoint you. The pounding of the mid-tempo, harsh EBM beats perfectly accompany the lyrics, which expose self-centered, attention-seeking people as pathetic because they are trying too hard to be someone they are not just to please others.

All out of hope

The next song ‘Implode’ reminds us of how important it is not to keep everything to ourselves because it is already hard enough to deal with the challenges of the outside world. I really liked the synth and percussion variations throughout the whole song who reach their peak when Sven screams out ‘You’re gonna weep and die alone’ after repeatedly singing ‘The cut’s so deep’.

The mid-tempo percussions and synth melodies of ‘Just leave it’ prepare us for the end of the album, both musically and content-wise. The lyrics about missed chances, passiveness and ignorance seem rather fatalistic because it is clearly pointed out that we cannot undo the mess we caused in the past.

‘Wish Myself Away’ is the finale to ‘Enjoy Dystopia’ and reminds me a lot of ‘What If There’s Nothing’ on ‘You Win. Who Cares?’. The slow, carrying rhythm and the beautiful synth melody in the chorus underline the hopelessness and loneliness depicted in the lyrics. You want to get out of the horrors of this world and this life, but you can’t get up because you are afraid to fail again. As the song’s melody slowly fades away, you are left with this depressing image of the inner conflict between wanting to get away and being powerless to do so.

I must admit that it took me a bit more time to get hooked to Solar Fake’s ‘Enjoy Dystopia’. Their last album ‘You Win. Who Cares?’ having become one of my favorite ones, it was difficult not to draw too many comparisons or be too critical. Still, after listening a few times, ‘Enjoy Dystopia’ has fully convinced me, and I can warmly recommend it to everyone who has known the band for a long time and appreciates their music and song-writing.

Even though we all miss seeing the guys from Solar Fake on stage and are craving to experience this special feeling of community on concerts and festivals again, let’s share this album with our friends in the meantime, listen to it in our homes and enjoy dystopia together! 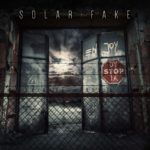