27+ most significant Electrorock songs that make you addicted 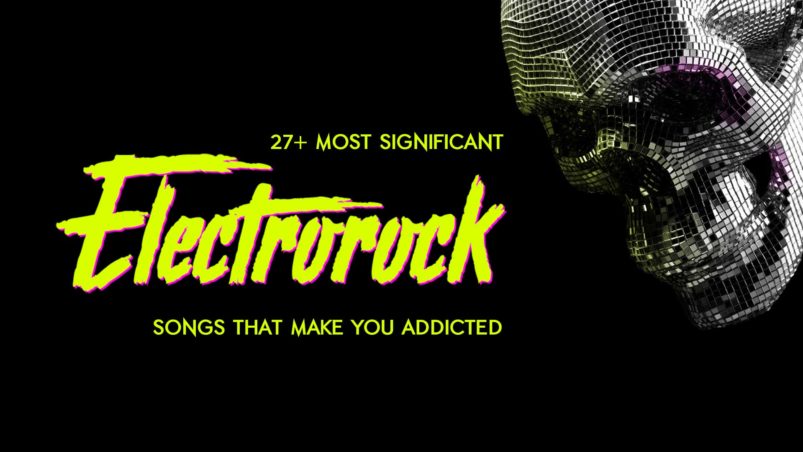 One of the most exciting genre fusions in this millennium is the merging of dark, electronic music and electric guitar driven rock. The genre is mainly known as Electrorock that’s sometimes on the edge to Industrial (more Metal influenced).

In my younger years I also had a short phase in which I’d rather listening to Rock and Metal. The rugged electric guitars and the raw sound was certainly also a reflection of my emotional world. This has, of course, also influenced me. And when I hear an Electrorock song today, I notice how I unconsciously start to headbanging.

The definition of Electrorock

In this article, I would like to introduce you to the most significant representatives of this relatively young musical genre. The most characterizing attribute at Electrorock is the balanced blend of synths and classic Rock/Metal elements. In a few exceptions, the electric guitars can also come from synthesizers, if the overall attitude is tuned to Rock.

The list doesn’t include Synth Pop songs with guitars or Rock/Metal songs with slight use of synthesizers. Here we list only songs that have a perfect romance from both worlds to create a new musical gene pool. One final note yet: This list has no ranking factor. Let’s (eletrco) rock!

Music video by ‘Enter Shikari’ performing ‘Sorry, You’re Not A Winner’. Directed and filmed by Alex Smith. Taken from ‘Take To The Skies’ album.

3. Apoptygma Berzerk – In This Together

Official music video by ‘Apoptygma Berzerk’ performing ‘In This Together’. Taken from the album ‘You And Me Against The World’.

4. Hadouken! – Turn The Lights Out

Official music video ‘Turn The Lights Out’ by ‘Hadouken!’ taken from the album ‘For The Masses’.

Official music video ‘My Darling Bullte’ by ‘Freakangel’. Taken from the album ‘The Faults Of Humanity’. Directed by D. Darling.

The official music video ‘Mind Decay’ by ‘Kevorkian Death Cycle’ is taken from the album ‘God Am I‘.

15. Army Of The Universe – Until The End

The Official music video for ‘Revelator’ taken from the ‘William Control’ album ‘The Neuromancer‘.

The official music video for ‘Aeon’ performed by ‘Rave The Reqviem’. Taken from the DWA album “Rave The Reqviem” and single “Aeon(s)”. Video produced by UCMO, Filmed by Daniel “Yor” Lindgren and Petter Perseius.

Music video ‘Teddy Thoughts’ taken from the new album ‘Punishments’ from the band ‘The Tractor’.

Official music video ‘I Breathe You’ by ‘AlterRed’ taken from the album ‘In the Land of the Blind’.

Berlin-based electronic-rock duo ‘Bullet Height’ have revealed a frenetic and intense video for their new single ‘Hold Together’.

Official music video ‘We Are the Freaks’ is the lead track from the album ‘Last Punks on Earth’.

Official music video ‘Run You’ is the first single taken from The Qemists’ album ‘Warrior Sound’.

Bonus content: Two particularly noteworthy songs, of which you can almost speak of the roots of the modern Electrorock.

This song blew my mind as it was released! Sonically and visually an absolute masterpiece.

Depeche Mode – I Feel You

As pioneers of contemporary, electronic music, ‘Depeche Mode’ started early combining hard guitar riffs with a Rock attitude in their own music.

Official music video ‘I Feel You’ performed by ‘Depeche Mode’ taken from the extraordinary album ‘Songs Of Faith And Devotion’. Directed by Anton Corbijn.

If you like the list, but only want to listen to the music, then check out our Mixcloud channel. Here you can listen to the whole list at home on your desktop or on the way with your Smartphone and the official Apps.

Do you think we missed an awesome Electrorock track?

Please leave us a line in the comment section below. We are curious about your favourite tracks that combine Synths and electric guitars.

We really would appreciate, if you share this page to spread the word of the most significant Electrorock tracks via your social channels.