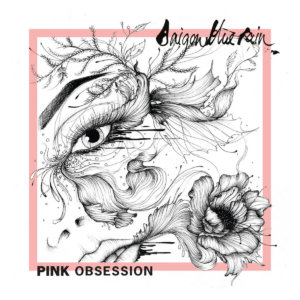 Saigon Blue Rain, formerly Stupid Bitch Reject was formed in Paris, France, at the end of 2012 by Ophelia and Franck. Their first self-titled EP, released in 2013 has been critically acclaimed. They released two further albums between 2014 and 2016 (What I Don’t See and Noire Psyché) which gave them the opportunity to perform at famous dark festivals such as Wave Gotik Treffen or NCN Festival and to support the Swiss band The Beauty of Gemina on their German tour.

At their beginning, the duo used to combine Cold-Wave and Ethereal-Wave, inspired by bands like The Cure, And Also The Trees or Cocteau Twins, melting their sound with Shoegaze influences. With their third album, Pink Obsession – released today by Hungarian label Dichronaut Records – that SBR’s work draws a watershed moment, their music became more anchored into pop and electronic sounds.

Pink Obsession, the third album of the band is leaving these sombre and concrete waters to embrace artificial sparkling neon skies. Indeed, synth is getting its full scope pushing intentionally guitars into the emotional background, whereas vocals are becoming prominent, leaving ethereal scales and sending out a shameless message to the listener’s ear, like interior voices in BPD or We Ask For Pain. The electro-pop tone dominates to deliver colourful landscapes like so many states of mind, sometimes marred by a few recollections from the past incarnated by a little child’s voice on Solstice, still imploring or avenging guitars on Incubus Mine. Like a slow relief process towards lightness of being, pink colour is the new black.

Listen to the full album now!