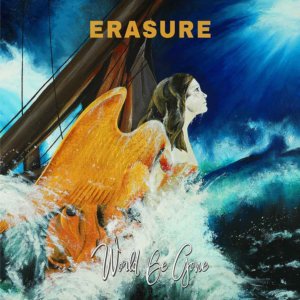 It’s unbelieveable that the awesome predecessor album ‘The Violet Flame‘ is almost 3 years ago. Time flies like a flight and leaves a melancholic trace. Although the current album ‘World Be Gone’ contains some very nice songs about love and hope, the basic mood is rather oppressive.

The album artwork promises at least graphically hope. The figurehead in the shape of an angel looks confidently towards a glimmering light in the sky. Even if we are currently sailing through the stormy ocean, it’s the hope that dies last. Perhaps it’s only a cliché and cheesy symbol, but it makes my heart feel much warmer.

The opener and the first single “Love You To The Sky” almost screams to become a cheesy radio hit. A song full of romance that I would emotionally compare with the well-known hit ‘The Power Of Love’ by ‘Frankie Goes To Hollywood‘.

It’s pure love, devotion and romance that you feel while listening this song. And not only for the people who live in the pink world that can be seen when you’re freshly in love. In any case, this is one of the most beautiful love songs I’ve heard in a long time.

But let me tell you that ‘Love You To The Sky’ is the most uplifting song on the whole album. It’s catchy and gives the listener an easy access to the new album. For all other tracks I definitely needed a few more attempts, because they are more bleak and the pop factor is less.

The mood changes quickly with the second number ‘Be Careful What You Wish For!’. I can immediately feel the melancholy that begins to crawl my back upwards. But as serious the song is and as bittersweet it feels, in the same way it’s wonderful brilliant. After an euphoric opener followed by a such sad ballad, let your emotions feel physically the visualized storm on the artwork.

More melancholy drips out of a big jar, also in the album title given track ‘World Be Gone‘. This is a low-tempo ballad about loss and nostalgia. The slow deep beating bass drum brings almost your own heartbeat out of the rhythm.

The number ‘The Bitter Parting’ doesn’t allow the mood bar to go up. Once again followed by a sentimental ballad, which is also important for the album because the album concept is generally very bleak.

‘Still It’s Not Over’ is a reminder of their place in the gay rights movement. Even I’m not involved in the gay scene, this track has really touched my heart. It’s also a ballad like the last three songs, but here the mood is quite different. It’s a really charming song that feels uplifting and hopeful.

Singing of a separation from a partner is already hard. But it’s even harder when the life partner died, which has happened to Andy Bell personally. That and the finding of a new love is the story in ‘Sweet Summer Loving’.

So much honesty and profoundness I have never heard in an ‘Erasure’ song before. Probably also the whole basic mood is responsible. Due to the quiet and minimalistic soundscapes, you’ve to deal compulsorily with the serious themes on ‘World Be Gone’.

The voice of the voiceless

‘Oh What A World’ already starts with a rather menacing and alarming sound. But the cool industrial sound fits perfectly with the dystopian theme. Even the beat and the melody dragging themselves with difficulty forward. The anger of the current world situation can be heard acoustically.

Related to the topic follows the track ‘Lousy Sum Of Nothing’. A true heart-breaking song with another serious subject too. It’s about the loss of feeling and empathy in the post-truth age we’re living. The chorus in this song is like a wake call about we all should think about. If a rather unpolitical band like ‘Erasure’ already has lines like: “The World has lost it’s loving”, then there is something seriously wrong.

Love is the answer

The album ‘World Be Gone’ ends like it starts. Here we’ve the second and last upbeat track on this album. Finally, ‘Erasure’ let us breathe again. The slogan is: “Never lose hope!”. ‘Just A Little Love’ is a wonderful Synth Pop song that is absolutely radio-friendly. This song bursts the chains of the built-up melancholy and darkness. It leaves the beautiful, warm feeling to do something good. A bombastic and glorious conclusion of ‘World Be Gone’.

Well, I guess ‘World Be Gone’ is the most serious and darkest album that we’ve ever heard by Andy Bell and Vince Clark yet. The album explicitly confront the dark forces. In the result, however, it dissolves into love and hope.

The album is understandable and conclusive. We live in gloomy times and the guys of ‘Erasure’ are now also at an age by reflecting the world more closely and revising the past. Let’s hope that the storm will soon settle and the waves will be smooth.

If you’re are expecting a typical easy listening Synth Pop album, then you will be dissapointed. If you don’t close your eyes to reality, feel empathy for all poor souls and hope for a better world, then you will certainly love ‘World Be Gone’. We recommend this marvellous, but unusual ‘Erasure’ album.

By the way, this album also made it into our article ‘The best Synth Pop and genre-related albums 2017‘. Further you should check the position of this album in the article ‘What is the best Erasure album ever?‘. 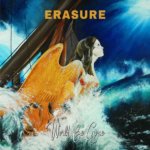