IAMX – Everything Is Burning (Metanoia Addendum)

Only one year after the really great ‘Metanoia‘ album, Chris Corner alias IAMX comes surprisingly with the addendum ‘Everything Is Burning’ around the Corner (Understood the hint?). The ‘Metanoia’ was strong enough to take position #5 in the Electrozombies Top Ten Albums 2015. Will the ‘Everything Is Burning’ its predecessor in terms of quality and originality meet? Or is it just a collection of songs that were not strong enough for ‘Metanoia’?

Beside the music I want to start to congratulate IAMX for the consistent visual artwork. For that successfully finished task, the album gets already some extra points, but this won’t affect the overall star rating :-P . I also love the idea of the animated cover artwork. Which make me think, why doesn’t exist a MP3 Player that shows animated gifs as cover artwork. iTunes team – You know what you have to do now!

Let’s listen to the tracks

The first track ‘Everything is Buring’ is an awesome and typical crazy ‘IAMX’ song. The album starts promising with this title given track that is full loaded of inspiring electric sounds. The second song ‘Dead In This House’ is almost at the same level. It’s comes with an interesting down-tempo disco beat. This sounds somehow weird and it is hard to describe, but I love this unique beat. The last track on the first CD that I want to mention positive is ‘Eternity’. The other 4 songs are just medicre or almost unfinished b-sides in my opinion.

Luckily includes ‘Everything Is Burning’ a second CD. This disc contains truly some magnificent remixes that significantly enhances the overall work. Among the great remixer are well-known artists like ‘Aesthetic Perfection‘ that gives a danceable beat on ‘Oh Cruel Darkness Embrace Me’. Also worth mentioning the gloomy and more dynamic remix version of ‘Happiness’ by none other than the Synth Pop Icon ‘Gary Numan‘. Furthermore I would like to indicate the remix version of ‘Mr. Kitty‘ that gives ‘North Star’ a certain amount of a disco touch.

Honestly I have to say that I wouldn’t publish this review if their wasn’t the second CD with the breathtaking remix versions. Overall I would recommend to buy ‘Everything Is Burning’. It completes the ‘Metanoia’ in a beautiful way like the missing link in the X-Files. (I’m sorry for my bad references.) 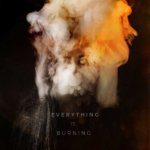