Mirror, mirror, who am I…and how many? 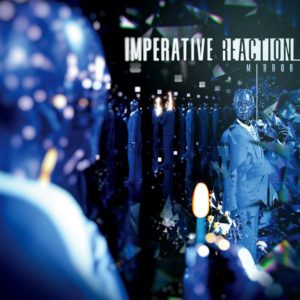 After their last studio album ‘Imperative Reaction’ in 2010, fans had to wait 10 long years for a new release, but a whole decade of waiting has been more than worth it: Imperative Reaction’s 7th album ‘Mirror’ will inaugurate the new year with 11 tracks that stay true to the band’s roots and at the same time bring something new into the mix.

‘I’ve never been as happy with an album as I am with this one, and I do think it is the most diverse album we’ve released,’ says Imperative Reaction’s Ted Phelps.

On ‘Mirror’, every single track is an emotional and musical overflow. The blend of simple and yet powerful EBM beats, a virtuous mix of various synth elements and Ted Phelps’ laments and screams give the songs a more complex and individual structure than compared to the band’s songs from previous albums.

Like a red thread, the theme of the mirror leads the listener throughout the whole album: through introspective monologues, reflections about past and present and pure, raw emotions.

Through a broken glass

The hard, constant EBM beats of the first song ‘Split’ got me right from the start and I can perfectly imagine this song as a concert opener. The metaphoric lyrics introduce the all-present topic on this album of losing the connection to one-self and thus feeling completely lost, like an imposter in a strange body or a mere reflection of your real self. The different synth elements in the bridge overwhelm you and seem to underline this inner struggle and feeling of disconnection.

Faster club beats introduce the next song ‘When Here Is Somewhere’, where the theme of the mirror appears once more. The situation seems more desperate though, as you lose all sense of orientation and get caught in an endless blur between reality and fiction, truth and lie. The synth elements occurring in the chorus sound like a downward spiral, leading through ‘infinite reflections’ of one-self.

If none of this is real, who am I? Just an infinite reflection from which I can’t hide
Lyrics from ‘When Here Is Somewhere’ by Imperative Reaction

The introduction to the next song ‘Glass’ immediately made me think of ‘Functional’ from the album ‘Minus All’, except that ‘Glass’ is a downtempo track that gives us a break after the first songs’ pace. The synth melodies in this song underline the tragedy of being caught in the past and the inability ‘to reach through the glass’.

‘Alter Ego’ takes on a faster pace again and takes up the same theme from the previous songs, more concretely the inner struggle between oneself and an alter ego. When Ted Phelps sings ‘now we stand eye to eye’ I can’t help but picture a person starring in a mirror, facing himself or maybe a version of himself he wants to get rid of. The dynamic of the bridge brilliantly stresses this feeling of disruption and loss.

The intro of ‘The Scales’ reminded me a wee bit of Faderhead’s ‘Acid Witch’. The complexity of the different synth elements combined with harsh electro beats fit perfectly with the lyrics of the song. You can feel the emotions growing stronger and more violent as the song reaches its peak of pure despair and hatred when Ted Phelps brutally screams out ‘f***** coward’. The interesting twist in the lyrics is that you don’t really know to whom he is talking to – himself, his Alter Ego or somebody else?

‘Stranger’ feels like a small break after the previous song’s violence and its mid-tempo beats and softer synth elements mark a transition towards different and yet strong emotions: Times are ever changing and we have to adapt, even though we might become a person we never wanted to be, risking to get estranged of ourselves. Compared to the other songs on the album, ‘Stranger’ is less aggressive and more melodic.

After the previous song, harsher and faster electronic beats introduce the first single release of the album. ‘Like Swine’ depicts a dystopic world, where ignorance reigns and humans blindly wallow in their self-sufficiency. In the very aggressive lyrics you can literally hear the distain in Ted Phelps’ voice.

Like pigs in a sludge we squirm with delight, crawling all over ourselves
Lyrics from ‘Like Swine’ by Imperative Reaction

‘Ignite’ starts off rather abruptly without any introduction and you’re immediately confronted again with the theme from the previous song: People blindly believing in what they see in the mirror, ignorant of what is truth or lie, and it leaves you with a hollow feeling. The chorus takes on a surprising industrial rock twist that you don’t find in any other song on the album.

How to mend a broken soul

Slower, mid-tempo and yet hard EBM beats introduce the ninth song ‘Intertwined’. Just as the lyrics say, it feels as if this song is the aftermath of the previously described conflicts. The synth melody accompanying the chorus takes the harshness of the beats away and reminds you to use the time that is given to you.

‘Disavow’ is yet another mid-tempo song but just as interesting and diverse in synth elements throughout the whole song. The lyrics hint at the difference between past and present and all the changes one’s personality undertakes overtime. The synth melody in the background of the chorus feels like a liberating opening and stresses the message to leave the past behind you, live in the present and see yourself the way you really are.

The last song of the album ‘Half Of One’ represents, in a certain way, a closure. The down-tempo beats and solemn synth melody of the song hint at the lyrics “there’s no fire left inside” after all these violent emotions. Now that the glass of the mirror has broken and all (false) reflections have disappeared, it is time to mend one-self and be at peace.

I must admit that I didn’t believe in another album anymore and was very excited when I learned that Imperative Reaction would release a new album in 2021 after all. Imperative Reaction excelled to combine many different elements in this introspective musical masterpiece: harsh electronic sounds, melodic synth elements, pure and raw emotions make ‘Mirror’ an intense listening experience. This album is a liberation scream that needs to be heard! 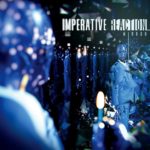 Imperative Reaction – Mirror
Split
When Here Is Somewhere
Glass
Alter Ego
The Scales
Stranger
Like Swine
Ignite
Intertwined
Disavow
Half Of One
Recommend
Split
Alter Ego
Like Swine
Weak
(Nothing to report here)
3.9