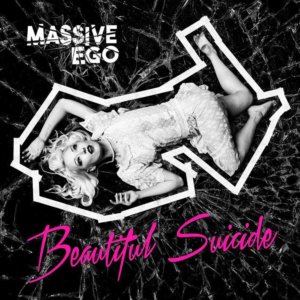 The more songs an album houses, the higher the chance of being badly evaluated in a review. ‘Massive Ego’ has taken the risk and come out on the market with a full-loaded ‘Beautiful Suicide’ with a total of 26 tracks.

The single predecessors ‘I Idolize You‘ and ‘Dead Silence Rising‘ were real club hits and indicated something big ahead.

The production of this massive album took a long time. At least the waiting time seemed to us damn long. Admittedly, a few remix versions are included on the two bulging CDs. Including ‘Ashbury Heights’, ‘Blutengel’, ‘Chrom’, ‘Ash Code’, ‘Ludovico Technique’, ‘Nature Of Wires’ and ‘Neroargento’.

The first CD already contains 15 tracks. This would be already worth buying this great album. But now it’s first a gear shift back and go into detail.

The opener is a skip track, but then comes the awesome song ‘Low Life’ featuring Maggie K DeMonde. In general this one is a mid-temp Synth Pop track and contains a super catchy chorus with a kind of an 80s vibe. The voice of Maggie K DeMonde lifts this number definitely up to a higher level.

‘She Uses Sex’ is more an Industrial Pop song and surly will fill the dance floors. After the first listening I rated this track with just 4 stars, but after listen to it a couple of times I really started to love this song. It’s been echoing in my head for days now, and I have to give in that it has the same ear-worm level like ‘I Idolize You’. Now it got 5 stars!

The gold vein is tapped

The 5th track on this gorgeous album is entitled ‘Kates In A State’ and this song comes again with really jazzy tune. The piano sound in this this track is typical 80s Synth Pop made for the mainstream radio broadcast. But in combination with Marc’s deep and pleasant voice it simply stands in a complete other context. The bridge with the ‘flash lights’ sound is brilliant.

The following track ‘Let Go’ is written by no other than ‘Boy George‘ himself, who is a friend of Marc Massive. This one is a pop/club hit from the first second.

A bit more on the industrial rail it comes to the next song ‘Haters Gonna Hate’ featuring Belzebub. The Big Beats are the engine in this energetic club track.

With the same caliber shoots ‘I Idolize You’, and hit the bulls-eye of a wonderful genre symbiosis. Raw, rough, but a catchy chorus. This is what we expect from a good Industrial Pop track.

Especially worth mentioning is the song ‘Out Of Line’, which is similar to a gloomy ballad. Further we enjoyed listened to ‘Where I Find Myself’, which could be better if the intro sequence of almost 50 seconds would be shorten.

‘Drag Me In, Drag Me Under’ start with an almost classical Futurepop beat. The speed is clearly set for the dance floor. Beyond, the bittersweet title song ‘Beautiful Suicide’ moves in the upper speed limit as well. Here, danceable beats await you with a serious lyrical background.

The deeper we dig, the darker it becomes

For the second CD I just want to leave comments on two tracks. ‘Rise’ belongs to the rather harder tracks of ‘Beautiful Suicide’, if you can say so. Marc Massive articulates the lyrics almost in a military tone. And the strong, clear beat supports this acoustic marching command.

You will also find the single ‘Dead Silence Rising’ on the second CD. This song has a much more bleak undertone than the most tracks on ‘Beautiful Suicide’.

A beautiful or suicidal result?

One thing is crystal clear: This album is far away from a suicidal reaction. It’s full of awesome hits with an extensive bandwidth of variety. As I mentioned, there is a risk that this huge amount of songs will not all be equally strong. And that the weaker songs can have a negative effect on the overall score.

But the album ‘Beautiful Suicide’ has struck itself more than bravely. We must unconditionally acknowledge that ‘Massive Ego’ has delivered a very beautiful album. We strongly recommend this long-player for your collection. 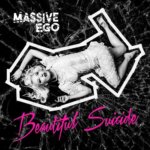