Home
Magazine
Article
What is the best Mesh album ever?

What is the best Mesh album ever?

To find out which is the best Mesh album, I did the work and rated every single album track by track. I sum­mar­ized the res­ult in a rank­ing that you can find here. At the end of the art­icle, the val­ues are again clearly arranged, shown chro­no­lo­gic­ally in a curve graph.

How I discovered Mesh and how visualisation matters

In 1996, people weren't per­man­ently online, the inter­net was only for freaks (nowadays nerds) and no one had heard of music stream­ing any­way, not to men­tion that it would have worked tech­nic­ally. To dis­cov­er new music, you reg­u­larly went to your loc­al record shop and browsed through the new releases. I know that sounds like the bab­bling of an old per­son at first. But nos­tal­gia is the key factor here!

At that time, Anton Corbijn's image aes­thet­ics were roughly described as "blurred and with fully sat­ur­ated col­ours". Exactly this image aes­thet­ic was also dom­in­ant in the music videos of the early 90s by 'Depeche Mode'. It was exactly this visu­al lan­guage that 'Mesh' used for their debut album 'In This Place Forever' as still young and unknown artists to attract atten­tion. It worked well for me.

I knew the visu­al lan­guage and imme­di­ately had an asso­ci­ation with 'Depeche Mode' and listened to the album in the shop. Wow, what a sound, I thought to myself, and I imme­di­ately bought the CD and was super happy to have dis­covered a new fant­ast­ic band. A day I still remem­ber very clearly to this day.

I don't think we've ever had a rank­ing that close togeth­er. All Mesh albums released so far are on an extremely high level in the synth pop scene. Even the weak­est album 'The Point At Which It Falls Apart' (iron­ic­ally) is above the mid­field with 3.33 stars and is an album worth listen­ing to with real high­lights. Find out what the best Mesh album ever is, even this rank­ing is very close.

7. The Point At Which It Falls Apart

Release: 1999
Overall Rating: 3.33 ★★★☆☆
Great tracks: I Fall Over, People Like Me With This Gun, Needle In A Bruise, The Damage You Do, Not Prepared
Weak tracks: These Empty Rooms, My Saddest Day

The second album con­tains one or the oth­er high­light and is gen­er­ally not a bad album. However, due to the amount of aver­age songs, it is Mesh's weak­est record in my opin­ion. Perhaps we have to give the album cred­it for the fact that at the turn of the mil­len­ni­um, the synth pop genre over­all looked very meagre.

You can't really speak neg­at­ively of a second-last place with a mag­ni­fi­cent star rat­ing of 3.79 and includ­ing ever­green hits like 'Leave You Nothing' or 'Little Missle'.

However, I have to admit that it is the album with the cov­er art­work that I like least of 'Mesh'. But this is about music and not design! For an album that is already 20 years old, it still sounds con­tem­por­ary. Maybe even time­less, but unfor­tu­nately also very mediocre. 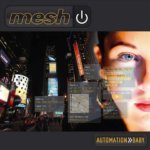 Release: 2013
Overall Rating: 3.96 ★★★★☆
Great tracks: Just Leave Us Alone, Taken For Granted, You Want What's Owed To You, Automation Baby, This Is The Time, Adjust Your Set, Born To Lie, Flawless, Never Meet Your Heroes, When The City Breathes
Weak tracks: AB Incidental No.1, AB Incidental No.2

'Automation Baby' was the first 'Mesh' album we reviewed here on Electrozombies. 'A Perfect Solution' was unfor­tu­nately a year too early, or we were too late. Depending on the point of view! I was really look­ing for­ward to the 6th stu­dio album of the Brits. Especially because I was able to listen to the album a few weeks before its offi­cial release.

Despite con­cert anthems like 'Just Leave Us Alone', 'Flawless' and the club banger 'Born To Lie', the album still ends up on the lower ranks. Nevertheless, the album is a real elec­tro rock / synth pop gren­ade and proves the extremely high qual­ity of the 'Mesh' albums.

Release: 2006
Overall Rating: 4.13 ★★★★☆
Great tracks: Open Up The Ground, What Are You Scared Of?, Step By Step, No Place Like Home, Petrified, Rest In Pieces, This Is What You Wanted, Room With A View, Crash
Weak tracks: The World's A Big Place

Out of sev­en stu­dio albums, four are in the 4+ star range. For that alone I give the band all my respect. 'We Collide' is the name of the 4th stu­dio album from 2006. I don't know what happened there, but I remem­ber that the album kind of passed me by at first. Somehow the mar­ket­ing didn't work so well here.

The album 'We col­lide' con­tains five 5‑star all-time hits, as well as some songs that scratch this level. So this album is a real synth pop mas­ter­piece that feels like it's fly­ing under the radar.

'A Perfect Solution' is the first album by 'Mesh' that was released on the label 'Dependent'. Despite the label change, the band has remained true to their sound and concept. What has changed is that the band is now a duo. After Neil Taylor left the band, Mark Hockings and Richard Silverthorn had to pro­duce the album by them­selves. I think they both suc­ceeded very well.

In my opin­ion, there are far few­er 5‑star hits on 'A Perfect Solution' than on 'We Collide'. It makes up for its pre­de­cessor with few­er gap fillers which in the end cata­pults it to pretty much the same rat­ing. Recommended for this album is the remix ver­sion 'An Alternative Solution', with remixes of 'Zeromancer', 'Iris', 'Assemblage 23' and many more.

Release: 2016
Overall Rating: 4.23 ★★★★☆
Great tracks: My Protector, Tactile, The Last One Standing, The Traps We Made, Kill Your Darlings, Runway, Before This World Ends, Two+1, The Ride, The Fixer, Once Surrounded
Weak tracks: Iris

At the time of writ­ing 'What is the best Mesh album ever?' I'm just real­ising that the latest stu­dio album is already 7 years old and I'm eagerly miss­ing new mater­i­al. 'Mesh' has become a steady con­stant in the scene and also for me per­son­ally. Musically always on the pulse of time and the qual­ity is always high. One of the few bands where I can blindly buy the next album without listen­ing to it and I know that I won't be dis­ap­poin­ted. Respect for this achievement.

The album 'Looking Skyward' did excel­lent in our review and I com­pared the band here with fam­ous bands like 'Camouflage', 'De/Vision' and 'Beborn Beton'. Furthermore, the album made it to 5th place in our 'The best Synth Pop and genre-related albums 2016'. But the com­pet­it­ors were also par­tic­u­larly tough in this year.

1. In This Place Forever

Great tracks: Involved, Last Breath Of You, I Only Wanted To, You Didn't Want Me, I Don't Think They Know, Something Wrong, Shatters, Confined
Weak tracks: Envolved

On the first place the circle closes with my open­ing text 'How I dis­covered Mesh and how visu­al­isa­tion mat­ters'. The fas­cin­a­tion of the album 'In This Place Forever' remains unbroken after more than 25 years. The debut album has aged very well in terms of sound and doesn't have the typ­ic­al 90s synth pop sound. It is simply time­lessly bril­liant! Not without reas­on and com­pletely deservedly, the album made it into our art­icle '20 Synth Pop mile­stones and col­lec­tion must-haves'. If you came across here and don't know that album I abso­lutely recom­mend you to listen to the album 'In This Place Forever' on Spotify now.

I think it might be import­ant to men­tion that I'm gen­er­ally not a fan of harsh gui­tars and heavy sounds. But these are an integ­ral part of the Mesh sound and are still very pro­nounced on 'In This Place Forever'. But Mesh cre­ate a per­fect bal­ance here. Yes, there are heavy gui­tars in the sound, but the synth pop factor is not com­pletely neg­at­ively influ­enced by it. Some songs I would more or less clas­si­fy in the genre elec­tro rock, but the mix­ture is always extremely har­mo­ni­ous with the oblig­at­ory dark undertones.

A release worth mentioning

For all die-hard Mesh fans: No, I haven't for­got­ten 'Fragile'. It's offi­cially lis­ted on Discogs under EPs. The back­ground is quickly explained. The EP 'Fragile' was released in 1994 with only 6 tracks. After the debut suc­cess of the album 'In This Place Forever', it was re-released a year later, in 1997, as 'Fragile (Extended)'.

This time in album length with a total of 10 songs (2 songs are "hid­den tracks"). In my opin­ion, the song 'Untitled' is more of an exten­ded bridge to the actu­ally hid­den song 'So Important'. Definitely a spe­cial case, which is why I don't want to include it in the rank­ing, but nev­er­the­less made a rat­ing to give you an idea of how it would have scored com­pared to the reg­u­lar albums.

All Mesh albums in a chart overview

Spotify playlist: The best of Mesh

In the Spotify playl­ist 'The Best of Mesh' are all songs with 4.5 or 5 stars in the rat­ing. At least when the album is avail­able on Spotify.