The Definition of Pop Noir 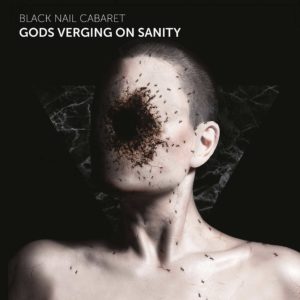 With ‘Gods Verging On Sanity’, Black Nail Cabaret has taken themselves to a whole new level in terms of quality, creativity and variety. I know, I already said that on the last album ‘Pseudopop‘, which was released 2 years ago. However, the continuous development and sonically improvement cannot be denied.

The new album includes only 9 new songs, but each song contains almost all the criteria for a single release. After the first listen through I had my mouth open and thought only: “Wow, what a fabulous performance! If ‘Black Nail Cabaret’ continues like this, they have a high chance to be elected for the album of the year“.

The opener ‘Black Lava’ starts with an absurd sound construct like you know it from a ‘Depeche Mode’ album. That builds up some tension! Especially well done is the switch of the entrance beat to the passage of the first verse. Calmly, but with high tempo and trembling synth chirping, the singer Emese Arvai-Illes performs the first lines in a clear and determining way. The chorus is accompanied by an alarming melody and makes me directly swing my shoulders back and forth in time with the beat. A fantastic song that with enough pressure and tempo fits perfectly as an introduction to ‘Gods Verging On Sanity’.

All the fear in me isn’t mine. I just grew into it.
Lyrics from ‘Black Lava’ by Black Nail Cabaret

The second song ‘Spheres’ does not need to hide from the strong opener. This one is altogether quieter, but in terms of multi-layering and variety it’s a beautiful song. I’m not a fan of repetitive comparison, but this can also be seen as a compliment. Because also this beginning reminds me of Depeche Mode. More precisely, the beginning of ‘My Secret Garden’. ‘Spheres’ sounds different and is travelling faster in tempo, but spiritually and emotionally I had arrived at this ‘A Broken Frame’ classic. The chorus is very catchy and has almost an Electropop coloration.

The first single ‘No Gold‘ was presented with a phenomenal music video in which Emese Arvai-Illes gets her hair cut completely. The whole thing is captured in beautiful, aesthetic black and white motion pictures. As uncompromising as the music video is the lyrics of this mid-tempo song.

Unusual synths, but so satisfying to listen to

‘To Die In Paris’ combines a big variety of extraordinary synth sounds and samples to a harmonic sounding Synthpop song. If you listen carefully, you’ll discover tiny sonic surprises and subtle effects everywhere, which make the track extremely exciting. With every listen you explore new facets of this sound construct. The lyrics are dark and tragic and stimulate the listener to reflect. For me one of the highlights on the album.

In full melancholy and enormous impact the song ‘My Casual God’ hits me. Rather a quiet tune in the low tempo range, but lyrically it gnaws at you like a predator at a bone. This is adapted in a fantastic way by an almost continuous and demanding pinch sound. Like a headache impulse this sound penetrates your head and won’t leave you alone.

‘Make You Run’ surprises at first with a Trip-Hop beat. Admittedly, I’m a little irritated. And the song sounds so 90s that it could have actually been produced there. Spooky, right? But when the chorus comes in, the sound gets a completely different coloration, which I like much more. Pressure and dynamics build up and the chorus itself comes out like a machine gun and every word hits its target precisely. Okay, you might hear it out. I’m not a fan of the Trip-Hop genre, but I’m quite excited about what ‘Black Nail Cabaret’ has made of it. The song brings variety to the album and mixing the genes of music genres is always a good idea. Very well done!

Miles ahead – soundscapes from the upcoming decade

From a lyrical point of view, the song ‘Maelstrom’ hits exactly the right spot, which has been on my mind for years and always stirs up emotions. It’s mainly about the information bubble in which we are all trapped. Sadly, a large part of mankind doesn’t realize this and even worse, for these people reality is mostly just a distorted perception of it. Of course this song will not cause a revolution or convert stupid people. But it doesn’t have to. It is a good and reassuring feeling that there are other people who are aware of this fact. Conclusion: A very important song in terms of content and of course the sound is perfect for this song.

I need to filter all the information. I need to simple down my life. We know too much and yet so little.
Lyrics from ‘Maelstrom’ by Black Nail Cabaret

Like a bright summer Electropop hit, with high tempo and synth sounds from a flower meadow, the song ‘Private Religion’ begins. The song also starts with a very catchy chorus, which you can sing along after only a few minutes. The feeling of awakening comes up in me while listening to this gorgeous song. We all need these uplifting songs every now and then to not fall into complete depression. Thanks BNC.

The very deep, pulsating bass vibrations make my eardrum really shake under my headphones. Should I take the headphones off? The pressure is almost uncomfortable. But after the 90s piano, the electronic bells sounds and the typical techno hi-hats kick in, everything is fine again. Funnily enough the result reminds me of ‘Saturday Night‘ by ‘Wigfield‘. Yes, exactly, this 90s Eurobeat/Eurodance starlet, but here in a less poppy and more serious version.

Let’s check the facts for the verdict

Ding, ding, ding, ding … Black Nail Cabaret makes my black heart melt. My personal result is quite clear. For ‘Gods Verging On Sanity’ I can only give a 100% buy recommendation to all lovers of dark, electronic music.

It was a good choice by Dependent Records to include this band in their portfolio. ‘Black Nail Cabaret’ has been under the radar in our scene for far too long. It’s about time that the big festivals see this and introduce this band to their audience. 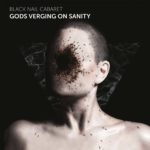