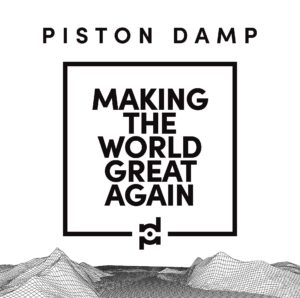 So far, the Piston Damp tale: The band was already foun­ded in 2000, but it remained a hobby pro­ject for the next 20 years until Jonas Groth (broth­er of Apoptygma Berzerk's Stephan Groth) wrote the song 'Something In Me' in 2020. This became their first single and was remixed by a num­ber of inter­na­tion­al acts includ­ing 'The Anix' and 'Technomancer'. 2021 the release of the single "Loose Ends' which included the B‑side "Don't" saw the light of the world. The highly awaited single 'Runaway' was released in April, with remixes from bands such as 'Mesh,' 'Die Krupps,' and 'Substaat'. The album 'Making The World Great Again' was craf­ted by the band and mixed with its good friend Magne Johansen. It was mastered by Ole-Espen Kristiansen for digit­al plat­forms, and by the legendary Morten Lund for CD and vinyl. On one of the tracks, Stephan Groth con­trib­utes on a vocoder.

I know that this is not an album by 'Apoptygma Berzerk' and I hope Jonas and Truls don't hold the com­par­is­on against me. The last really good Apop album 'Rocket Science' (2009) was a long time ago and we all thirst for new mater­i­al. Sure, 'Major Tom' and the last few EPs were great, but they also felt like con­sol­a­tions some­how. With the first beats of 'Heart Of Fire' my heart is lit­er­ally on fire! This is exactly how I ima­gined Apop's next album in my wild­est dreams. By the way, I'm aware that this sounds filthy, but I love this band just as much as I love 'Depeche Mode'. An epic, elec­tron­ic sound that hero­ic­ally leads into a new future, or some­thing like that can be used to describe the sound. After hear­ing the first vocals, tears of joy come to my eyes. I am so infin­itely over­joyed with this mag­ni­fi­cent opener.

I don't have to write much about the Single 'Runaway', I sup­pose. If scene per­son­al­it­ies like 'Mesh' or 'Die Krupps' remix it, then the duo must have done some­thing right. The song is super catchy and a fant­ast­ic club hit to fill the dance floor. I always find these little SciFi-sound­ing synth effects inter­spersed par­tic­u­larly awe­some. Used subtly, this enhances pretty much every song in this genre.

The debut Single 'Something In Me' has played its way into my heart. Do you still know the good old C64 or Amiga scene intros and demos? The track starts with just such an ingeni­ous sound. So how do you respond to that? Furthermore, this song has a bit of the naive atti­tude of an 80s Electro Pop song, but is anchored in the now. The lyr­ics are so beau­ti­ful and make every­one melt. As I'm writ­ing this and think­ing about how to describe this song, all I can think the whole time is "How can a band cre­ate such an infin­itely amaz­ing song?". I am so on my knees.

The song 'Depth Of Your Eyes' begins melo­dra­mat­ic­ally and I am imme­di­ately groun­ded again after the flight of fancy of the first tracks. The strings and words pull the ground out from under my feet and I want to start cry­ing right away. However, there is noth­ing arti­fi­cial here in the song (except the synths of course), no, the sad­ness really comes from deep with­in and you can feel that with every note played. I love songs that can trig­ger such strong feel­ings and that has to be rewar­ded with 5 stars. Thank you for this song!

After anoth­er short but very emo­tion­al 'Never Though It Would End' we come to the next high­light on the album. The name giv­ing title track 'Making The World Great Again' starts almost with a mil­it­ary strict EBM beat in the style of  a typ­ic­al 'And One' club clas­sic and a 'Priest' opus. Damn, that sounds sweet and, above all, so fuck­ing right! Loaded up with pos­it­ive energy, I finally want to get back on the dance floor and dance to this.

The song "Don't", which has already been released as a B‑side with the Single 'Loose Ends', begins dark and pulsat­ing. The beat and the bass­line, which have the grace of a New Order clas­sic, come banging out of the speak­ers. Again, there are typ­ic­al 80s synth ele­ments in the melody that beau­ti­fully bright­en up the song and bring in a little more variance.

An incontrovertible and painful truth: Everything ends at some point

'Loose Ends' is a lovely clas­sic Synth Pop song, with not too many sur­prises. But it has a chor­us and a melody that imme­di­ately sticks in the ear. But what more do you need? A mid-tempo beat, har­mon­ic­ally bal­anced synths, a catchy rhythm and a good dynam­ic, then the Synth Pop heart is sat­is­fied.

With a gor­geous, dark beat, 'Piston Damp' presents the song 'Testimony'. During the first verse, a ghostly voice echoes over my head­phones in a ste­reo effect. Pure goose­bump feel­ing! Lyrics like: "but every time you tell me this I feel lost without you", send cold shivers down my spine. It's nice to hear such an emo­tion­ally charged song again at the near end of the album. At this point I would like to hon­our the fact that the arrange­ment of the indi­vidu­al tracks on the album has been chosen excellently.

The final track 'Another Pain' flirts with a typ­ic­al "last song bal­lad" at the begin­ning. But the duo man­ages to build up the song lin­early from a very min­im­al­ist­ic sound at the begin­ning to an ulti­mate, orches­tral grand finale with everything that goes with it. Only to let the opus come to an sud­den end. This is a state­ment that every­one can inter­pret for themselves.

An album to make the world great again

Yes, the album 'Making The World Great Again' is a glimpse of hope in our dark world. With the end of prob­ably the most incom­pet­ent and empathy-less American pres­id­ent ever, and the end of the Corona pan­dem­ic approach­ing, it feels like everything is some­how going to be alright again. Of course, there will always be crises, wars and injustices on earth. As a sober real­ist, I don't want to indulge in any illu­sions or uto­pi­as myself. That's why it's all the more import­ant to bring hope into the world. And some­how this album gives me exactly the energy and vibes it needs to do that.

I already ordered the phys­ic­al CD and I only can recom­mend the album highly. For 'Apoptygma Berzerk' fans the pur­chase is oblig­at­ory, To every­one who loves Synth Pop and Future Pop: Buy, buy, buy Piston Damp's debut album 'Making The World Great Again' now! 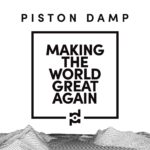