Home
Releases
Tribute
Anode (An Electrozombies tribute to And One)

Anode (An Electrozombies tribute to And One) 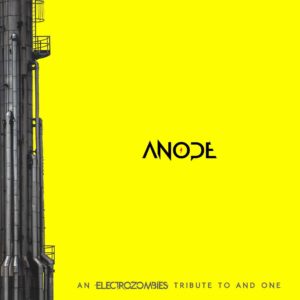 A German success story in EBM

Quietly this year the debut album ‘Anguish‘ by the German EBM / synth pop band ‘And One’ celebrated its 30th anniversary. We took this as an opportunity to dedicate a tribute to this iconic band. And the club classic ‘Metallhammer’ has been around for as long as that! The epitome of the machine cold, German EBM sound. This is only topped by the evergreen ‘Techno Man‘ from the album ‘Flop!‘. It was this song that first drew my attention to And One.

Why are we doing a tribute to And One?

I think it’s a pity that with many bands the release cycle gets longer and longer with the decades of existence. The periods of drought for the fans become more and more unbearable. With this tribute, we would like to shorten the waiting time until the next long player.

So the first reason is very obvious and understandable. The second reason is probably a bit more cerebral. We all (And One fans) know that Steve Naghavi is a big Depeche Mode fan. Everyone knows the childhood pictures of him in his bedroom with the DM posters. Didn’t we all look like that? When I stumbled across one of these pictures, the thought came to me: “There are countless Depeche Mode tribute compilations. Why not And One?”.

After a little research, I came across the 2019 tribute ‘Cover Sind Cover‘ again. Generally a good tribute, but with one flaw. Too many repetitions of tracks ‘Techno Man’ is featured three times, ‘Get You Closer’ and ‘Für’ twice. So a tribute with more variation was my goal. Thus ‘Anode (An Electrozombies tribute to And One)‘ was born.

German precision work: We count 10 And One cover versions

As almost always, I’m happy when the Russian band ‘Fatal Aim’ join us. I love their crisp synthesizer sound, precise execution and fantastic vocals. And like every time, I hope for a debut album from the band. To feature the opener is obligatory in this case.

But also other very dear bands and artists like ‘Alphamay’, ‘Ultranoire’ or ‘Orpheus In Red Velvet’ are back on board. Thank you that I can rely on you and that you always deliver good songs. I hope that you will get more fans with each of these outputs.

Last mentioned, but not least are the “new kids on the block”. On the compilation you’ll also find a few new bands that I found via our new acquisition channel Submithub, as well as scene greats like ‘Beat Noir Deluxe’, ‘Auger’ or ‘Beata Beatrix’.

The tracklist of ‘Anode (An Electrozombies tribute to And One)’

The tribute compilation will be released worldwide December 21st, 2021. It’s available on the major digital channels iTunes, Amazon MP3, Deezer, Spotify and YouTube Music. Support us by buying this tribute and enjoy all new interpretations on ‘Anode (An Electrozombies tribute to And One)’. The release on all major streaming services will follow in December 2020.

Get ‘Anode (An Electrozombies tribute to And One)’ here: