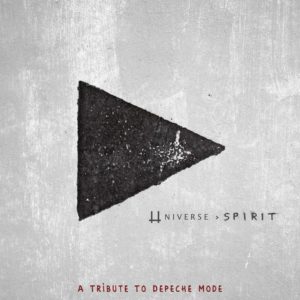 Electrozombies is proud to present the second part of the pos­sible best Depeche Mode trib­ute com­pil­a­tion ever made. ‘Universe Spirit’ is the name and also indic­ates the con­tent. Because this trib­ute con­tains songs from the long-play­ers ‘Sounds Of The Universe’ (2009), ‘Delta Machine’ (2013) and 'Spirit' (2017).

The most unique tribute, too

The concept behind this com­pil­a­tion was to make a trib­ute album that is out­stand­ing on the world of the sheer end­less Depeche Mode trib­utes. Of course we also love the old clas­sics, but we wanted to have a more unique trib­ute com­pil­a­tion. We're tired of listen­ing to the ten thou­sandth cov­er ver­sion of 'Enjoy The Silence' or 'Never Let Me Down Again'. There's noth­ing new you can expect.

That's why we decided to choose selec­ted songs from the era without Alan Wilder in the band lineup. We think every single album from Depeche Mode is abso­lutely bril­liant. Here we want to present the 'less pop­u­lar' cov­er songs from devotees with pas­sion to you.

What's in the sequel?

Also the second part of our 'Depeche Mode' trib­ute con­tains a bunch of fab­ulous cov­er ver­sions. It's really hard to select a few to let you know what you can expect on this release.

Let's start with the first offi­cial music video release of the com­pil­a­tion 'Universe > Spirit (A Tribute To Depeche Mode)'. This one is done by the Dutch Synth Pop band 'Model Depose' who cre­ated an awe­some cov­er ver­sion of 'Poison Heart' and filmed a intense and impress­ive music video for it.

'So Much Love' is rein­ter­preted by the German Electrorock band 'Pre/Verse'. You can hear with every beat how much heart blood is in this cov­er ver­sion. Black and Pink are the col­ours of the band. Analogue to this is the melt of the sound and lyr­ics. The res­ult is a gloomy track in an upbeat mood.

For every one who had dif­fi­culties to get access into the song 'Scum' or simply did think it isn't catchy enough, should listen to the bril­liant ver­sion of the French Electropop band 'Foretaste'. These are just some examples of the wide vari­ety of this tribute.

The trib­ute com­pil­a­tion will be released world­wide September 4th, 2017. In the first wave it will be avail­able on the major digit­al chan­nels iTunes, Amazon MP3 and Google Music. Support us by buy­ing this trib­ute and enjoy all new inter­pret­a­tions on 'Universe > Spirit'.

Get 'Universe > Spirit (A Tribute To Depeche Mode)' here: