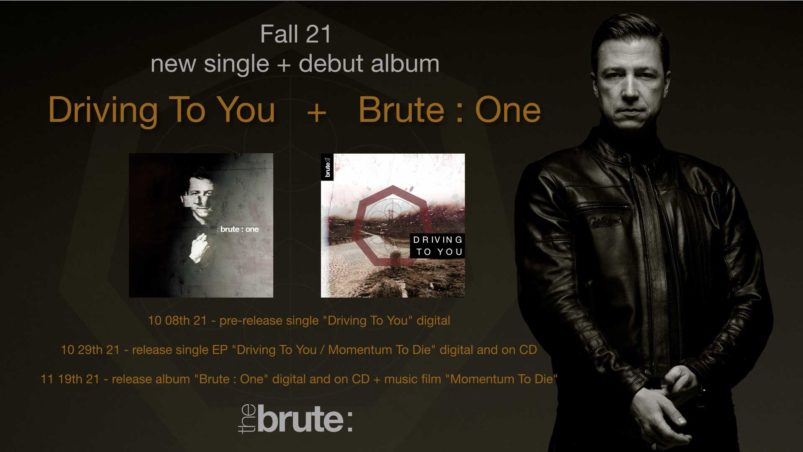 The Brute : is an Electronica music group and combines progressive electronic sound with haunting vocals, wonderful melodies and a melange of Synthpop, Blues, Industrial and Rock influences. The Brute: was launched in 2018 by Daniel Gierke. The songs of The Brute : contain echoes of classic electronic bands but given a more modern touch made for a mainstream audience and come along with a mix of driving bass lines, atmospheric vocals and lyrics that gain new meanings with each listen.

“Driving To You” is already the fourth single of the music project after it was founded in 2018 and will also be released as an EP on CD in stores. The single EP will contain some remixes as well as the soundtrack of the short music film “Momentum To Die”. Just in time for the digital release of the single on October 8th, 2021, there will be a sensational video with excerpts from the film.

Shortly after the single, the debut album “Brute: One” will be released digitally and on CD in stores on November 19, 2021. The album will feature revised singles that have already been released and completely new songs. The nine tracks are a varied journey through the sounds of electronic music, from songs with more rock rhythms like “Driving To You” to pop with catchy melodies like “Lonesome Hero”, calm songs like “Rain” and experimental pieces with industrial-like sounds like “Lost”, which are carried through atmosphere but above all through the varied voice of Daniel Gierke.

Momentum To Die a short music film by The Brute

Also on November 19th, 2021, the passionate dream and film project “Momentum To Die” by Daniel Gierke, the mastermind behind The Brute :, will be published. It is short music film of around 18 minutes in length, which is rearranged with sounds and melodies from the debut album and accompanied as film music. The film was shot in autumn 2018 on the original film sets of the classic movie James Bond Goldfinger in the Swiss mountains with kind support of the Swiss Army, which provided the former mountain fortress Sasso Grand Gottardo on the famous Gotthard Pass for the final shots. Significantly, the music film is The Brute: ’s homage to old spy movies from the 60s and 70s complemented by a modern electronic sound.

Due to the pandemic, The Brute: decided not to go to concerts in 2020 and 2021 and instead focused on studio work. But it should go on stage in 2022. The Brute : is right now again in the studio and works already on a new project, which will be released in Spring next year.