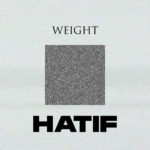 The song ‘Weight’ is the second Single from the Swedish duo ‘Hatif’. The track takes you on a journey through a tense and dark analog soundscape. Despite all the melancholy, the sinister fog of the overall picture is broken by a catchy and light synthesizer melody. According to the great role models such as ‘Depeche Mode’ or ‘Sisters Of Mercy’.

Listen to ‘Hatif – Weight’ on Spotify

Listen to ‘Hatif – Weight’ on Bandcamp