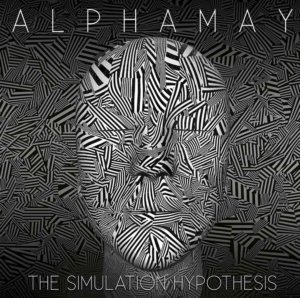 ‘The Simulation Hypothesis’ is the name of the coming ‘Alphamay‘ album. It marks the final chapter of the ‘Dazzle Trilogy’ and is the sequel to the celebrated album ‘Twisted Lines‘ which entered the German Alternative Charts` top 10 twice in early 2016, peaking at #7.

‘The Simulation Hypothesis’ picks up the story where ‘Dazzle Camouflage‘ ended. It is an album about the many facets of one’s own personality observed from the different angles of perception in our modern times, both physical and digital in nature.

The journey started three years ago with the observation of today’s tendencies to create masks and avatars to camouflage one’s personality. It continued one album later with the twisted lines our lives take.

Now ‘The Simulation Hypothesis’ marks the conclusion of everything asking the all important questions: “Are we more than what we see? Is there a backside to the mirrors of our perception?”.

Originality wins in the end

‘Alphamay’ has grown to be one of the most interesting contemporary electro pop bands. Their unique blend of modern synthesizer sounds combined with the glorious sounds and soundscapes of the pioneering days back in the 80ies has become a style of it’s own and fascinates more and more listeners and concert goers.

The resulting music bridges from classic synth pop that keeps the crowds on the dance floor to spherical, dark soundscapes of romantic melancholy.

Having been award with a price in the category „Best Electro Pop Act“ at last year`s German Rock and Pop Awards, ‘Alphamay’ is looking forward to a bright future. Their upcoming tour takes them all over Germany.

Tracklist of ‘The Simulation Hypnothesis’

Period of campaign: April 25th – May 18th, 2017
Annoucement of winner: May 18th, 2017
Who can win: Anyone worldwide, except internal members of Electrozombies