Ember Twin – Let Us In 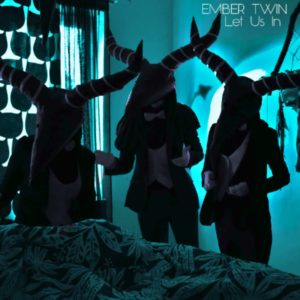 An intense ride through the dark places

‘Let us in’ is the second full-length album by Swedish Ember Twin. William E, founder and creative epicenter is out and about to “create music without rules” and this is not one of these empty phrases we hear so often. He melts down Punk, Rock, electronic and experimental elements to a dark, sometimes menacing, sound experience without losing touch with pop culture and a healthy bit of earworming.

I have to admit: what first caught my eye was the cover song at the very end of the album for it is one of my alltime-favourites: ‘Punkrocker’ by The Teddybears. Although I’m usually no big cover enthusiast, I’m very pleased here. This version has a new twist, an Ember Twin twist, without denying its roots. And it’s pretty much the only optimistic fun-song on this album.

Deep into the guts

Starting off with the nightmare-ish ‘Out of light’ which obviously deals with his last relationship we get drawn in by William E’s distorted voice and slightly noisy song composition.

‘Fur’ which is meant very literal has a driving, staggering beat and the hookline ‘I want your fur’ could provoke interesting scenes on the dancefloors.

Having been associated with the Punk scene when I was a teen, ‘Don’t be yourself’ is pretty much a reminiscence to me. But it is only in matters of topic – musically I’m slightly reminded of Prayers with their Hip Hop background. As I quoted: no rules!

What I really like is the fact, that this song is conceptually connected with the next called ‘Act’. As topics are related, Ember Twin also chose a subsequent composition here. And I love the line “life’s a party but it’s fucking fatal”.

‘Another place’ is an instrumental – sorry, but noone will ever get me with an instrumental. This might sound ignorant, but it’s just not my cup of tea.

‘10 inch tall’ gets you back to the nightmare-ish, fragile, unstable state of feelings. Sounds are actually quite minimal but very well chosen. The whole song feels experimental, although its structure is not. Creepy clattering sounds get you deeper into the tunnel of horror and a very reduced piano gives the whole setting a feel of dusty haunted houses.

A little lighter and with a driving gallop ‘I miss myself’ sarcastically breaks its way with a hint of 8bit irony while ‘Happy birthday’ is absolutely not what you might expect right now. Sagging and pushing with a dash of dubstep we’re on our way down, down, down again.

Closing with ‘Punkrocker’ is way unexpected for suddenly the clouds tear apart, thunder stops and you feel like on a high school party. This might sound crazy, but that complements actually quite well the concept carried through this record.

Ember Twin created an album that caught my ear in an instant. Having listened twice, I started singing along. Funny, with all these negative feelings wavering about the individual songs. Opposites attract. If you’re in for an intense, guitar-led but still electronic journey through the depths of life, you should definitely treat yourself with ‘Let us in’!

Listen to ‘Ember Twin – Let Us In’ on Spotify