Yellow Lazarus – The Mark Inside 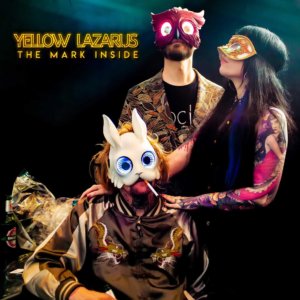 The Industrial Pop genre is on the rise

Emerged from nowhere and struck us with a merciless impact. Towards the end of the year, we get something to party on. The “secret trio” with the project name ‘Yellow Lazarus’ mixes all possible music genres together in the wildest manner and fucks the usual conventions. With this beat power, electropunk attitude and creativity I would have wished for the last ‘The Prodigy’ albums.

Who are Yellow Lazarus?

Watch your step! Possible spoiler: Behind the project ‘Yellow Lazarus’ are the band members with the mysterious names: Slender Owl – Vocals, Scarfox – Screams, U+1F430 – Growls. So much is clear to me, the clean vocals are from Anders Hagström (Ashbury Heights) and the male growls are from Elliot Berlin (Aesthetic Perfection). I can’t assign the female growls yet, but if you know the woman, you are welcome to write that in the comments.

The songs on ‘The Mark Inside’

‘Vicious Memories’ begins like a typical Ashbury Heights song before being brutally interrupted by growls and distorted synthesizer. The harmony is interrupted in a harsh way that you usually would expect in an ‘Aesthetic Perfection’ song. I like the opening track and be greedy for more.

‘Dead Slot Machine’ is banging big with the bass! It has a bit of funfair techno but a damn dark fair with the typical freak show and creepy clowns. Does anyone still remember the techno compilation series ‘Thunderdome’? Anyway, here the feet don’t stay still and dancing is the order of the day.

Through the music video of ‘Insects In Dry Places‘ I first came across ‘Yellow Lazarus’ and instantly fell in love with their music. This track is a crazy mixture of brutal Electropunk, Big Beat and Reggae. I dislike Reggae in general, but here and in this combination, it’s a god-like blast of creative music.

Are you up for the ’90s Eurobeat with a big bang? The track ‘Tangier’ offers exactly that and is a lot of fun. Sadly you can’t see the grin on my face and how hard I celebrate this song right now.

Since I just mentioned ‘The Prodigy’. The last song seems to be a kind of tribute to the band or to Keith Flint, who unfortunately died too early. At least the beginning and some parts of the song are strongly reminiscent of the guys from the UK. Somewhere between Electropunk and a groovy Hip Hop beat the song switches back and forth. Simply a fantastic mixture. Please give us more!